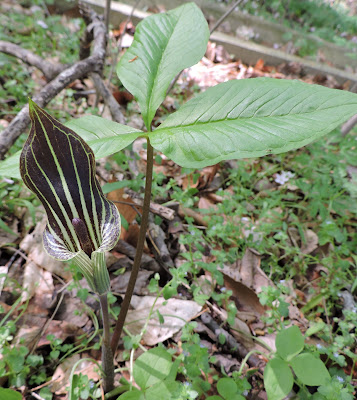 Jack-in-the-pulpit (Arisaima triphyllum) has over 30 common names: Indian Turnip, Wild Turnip, Marsh Pepper, Pepper Turnip, Bog Onion, Brown Dragon (due to the burning taste of the raw plant), Dragon Turnip (due to its turnip-shaped corm), Starchwort, Wake-Robin, Dragon Root, Marsh Turnip, Swamp Turnip, Devil’s Ear, Priest’s Pintle, Indian Cradle, Memory Root, Cuckoo Plant, Three-leaved Arum, Parson-in-the Pulpit, Lady-in-a-Chaise, Lords-and-Ladies, and Cuckoo Pint to name a few. Some authorities recognize 3 species and others simply lump them into one (as if there wasn’t enough confusion with the common names). It’s most common name stems from the flower structure: the “jack” is the spadix or club-like part who stands within the pulpit which is the spathe or curved cover or hood overtop. It ranges from Canada to Florida, west of Kansas. The flower color can be quite variable, especially being yellow or dark striped.

The plant is a member of the Arum family (a word that gets its meaning from an Arabic word for “fire”) and as such protects itself by producing calcium oxalate crystals. These crystals can cause a severe burning sensation if it’s eaten raw. It can cause mechanical damage as well. Some people even get skin irritations or blisters from skin contact with it. It use to be a country trick to try and get someone to bite it and suffer the consequences. There is even a story of a Meskwaki tribe who got its revenge on the larger Lakota (Sioux) tribe by inviting them to dinner and then feeding them raw jack-in-the-pulpit in the meat (and then attacking them when they were in great discomfort). Some people have even died from swollen throats after ingesting it. While birds and others can eat the bright red fruits, it can cause issues with people. When we process the seeds for planting, we usually wear gloves and make sure not touch our faces or eyes.

Having said that, a few of its common names point to its edible uses. When thoroughly dried (6 months or so) and roasted, it was eaten like potato chips or made into a flour (which reportedly has a chocolate-like taste).

It was also used quite a bit medicinally. North American tribal ethnobotanist Daniel Moerman lists many varied uses: The Cherokee used it for skin diseases, for flatulence, for colds, for intestinal worms, and for boils. The Chippewa (as well as the Menominee and Ojibwa) used it as an eye medicine. The Iroquois were said to even use it as contraceptive along with treating headaches, bruises, sores, fevers, and children’s diarrhea. Interestingly, instead of using as a contraceptive, they used it induce pregnancy in horses. The Pawnee likes to use the seeds in their gourd shells to serve as rattles (as well as for headaches and rheumatism). Some tribes had to ceremoniously eat the raw leaves as an entrance into manhood. During the 16th and 17th century, people used starch made from the roots as a stiffener for clothes, thus the name Starchwort. The bright red berries were also used to make a red dye. During the Civil War, the Confederate states were blockaded from getting most goods. So they tried to find alternatives especially in food and medicines. The person in charge of compiling all of this was Dr. Francis Peyre Porcher who compiled a manuscript entitled the "Resources of the Southern Fields and Forests, Medical, Economical, and Agricultural Being Also a Medical Botany of the Confederate States" commonly referred to as the Confederate Ethnobotany. About "Wake Robins", as he called them as they often open when robins are nesting, he compiled several uses. He described how mixing the fresh roots with honey or syrup could be used for sore throats, particularly in children. He said it was also useful in treating rheumatism and a concoction of the sliced roots for poison ivy. He also described its use for an expectorant, for treating ringworm, skin diseases, in addition to it being used for making bread.

This plant has an interesting development in that it can change sex throughout its life. When it first starts growing, it doesn’t produce any flowers. As it gets larger and stores enough nutrients, it will start producing male flowers, have one leaf stalk with three leaflets and be small in size. The flowers on these have a small opening at its base that allows pollinators (often fungus gnats or other small creatures attracted to rotting flesh smells) to escape. Once it builds-up its store of nutrients, it can finally invest in a larger, female flower with two stalks with three leaflets that lacks the opening at the base of the flower. If pollinated, this may then sap so much energy from it that it may revert back to the “cheaper” male plant. This cycle is referred to as sequential hermaphroditism. They can live for 20 years so are a long lived plant. 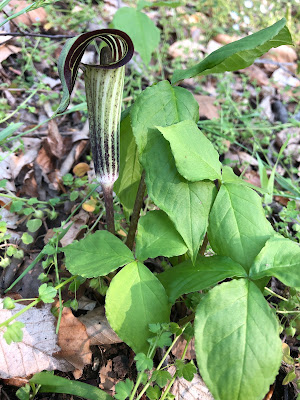