So the Common Blue (Confederate) Violet (Viola sororia) is so routinely seen in our yards that they are often ignored. They however have some interesting natural history and folklore tied to them. Indeed much of what follows can also be applied to the other 36 or so species found in both Virginia and Maryland as well.

First off, some folklore of violets in general. Violets are said to be the symbol of Athens, as the legendary founder Ion was given violets by nymphs when he arrived at the future place for the city itself. Indeed the common for violets in Greece is usually thought of to be Io. The connection to Greece also goes back to several legends concerning their gods, which were subsequently also applied to Rome. The king of the gods Zeus (Jupiter in Rome) was said to have fallen in love with a beautiful maiden called Io (Viola in Rome). In other versions she is a magical nymph, the daughter of a river god and King Argos. Regardless, Zeus (Jupiter) was constantly after her and tricked her into making love to him. His wife Hera (Juno in Rome) found out about this affair. This was particularly bad as Hera is the goddess of marriage and she wanted to teach the maiden a lesson that would be passed on to all mortals. Here the story differs even more depending on who tells it, but in all of them, Io (Viola) ends up losing. In one version, Hera (Juno) catches up to the mortal and changes her into a white heifer with gadflies biting her until the end of days, and Zeus (Jupiter) was unable to do anything about it. Her tears became the violets. In another version, Zeus (Jupiter) finds out that Hera (Juno) is jealous and angry and so he changed Io (Viola) into a cow, as what Hera has planned would have been so much worse and so she can't find her. Here either her tears turn into the violets, or Zeus (Jupiter) makes the violets appear so she can have something beside grass to eat. No matter what version, Io (Viola) is the ultimate loser.

In Rome, people saw the violet as a symbol of innocence and modesty, and would often lay violets on children's graves. Romans also thought that wine made from violet blossoms meant that you could not get drunk. Other Romans used it to prevent hangovers. Medieval Christian folklore believed that the flowers sprung from Adam's tears. Other medieval Christians believed that the flowers of violets once were tall and stood upright, but that changed on Mount Calvary where Jesus was crucified when the shadow of the cross fell on them. Ever since violets have bowed in shame of being present in such sad events. It has been traditional to use the flowers in Good Friday decor around Easter since then as well. Violets are also said to be Mohammed's favorite flower.

Violets are also said to be a symbol of the Bonapartist movement. Napoleon Bonaparte was said to carry violet flowers with him in his pocket in a locket. It was said that once he was captured and exiled, that he would "return with the violets' of the spring." It was also said to be his wife's favorite, used for their wedding, anniversaries, and finally on her grave. Napoleon was sometimes called "La Coporal de Viollette." His followers used the plant as a code and symbols for their communications. The pansy, a cultivated variety of violet, is said to come from the word "pensee" meaning thought and sentiment. Indeed violets have over 200 common names relating to love and sentiment. 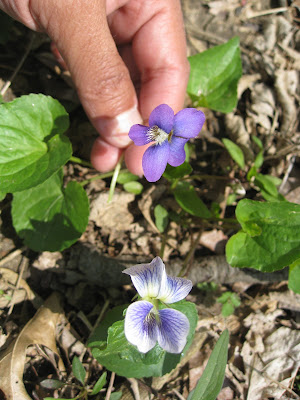 Violets also have some other traits in common. Most violets are Myrmecochorous, meaning that seeds have an attachment called an elaiosome that some species of ants find delectable. They then take the seeds to their nests, eat the elaiosome, and discard the seed into their waste areas, planted below ground and guarded by ants. Ants therefore are the main seed dispersers. For more on this interesting way of spreading seeds see my Capital Naturalist Blog here: http://capitalnaturalist.blogspot.com/2014/04/myrmecochory-ants-in-our-plants.html.

For many violets, including the Common Blue (Confederate) Violet, they also have another reason they're so common. The flowers are easy to see when they're in bloom for pollinators to find. These showy blooms are said to be Chasmogomous, Greek for "open marriage" with the petals highlighting around the pollen-bearing open flower head. However, especially early in the season, pollinators may still not find these flowers to pollinate. Therefore, especially for those spring blooming early species, they hedge their bets by producing Cleistogomous flowers. This is Greek for "closed marriage" and involve flowers that never open. These instead self pollinate, which while not great for genetics, does mean they will always produce seeds for the ants and to germinate. These are usually low to the ground and near the main stem, as they have no need for any pollinators to spot them. This is one reason why some species of violets are so common in our yards.

Violets are said to host 30 caterpillar species, including many of our Fritillary butterfly species. By naturally having their flowers pointing downwards, they protect their chasmogomous flowers from the rain and losing of pollen. Now our Common Blue Violets come in some various color forms. This includes the Confederate form which is commonly found growing side by side with the more common blue colored ones. They are one and the same violet species.

Violets are edible, both the leaves and the flowers. Most prefer to eat the blue colored or perhaps white colored ones over the yellow colored ones, some saying these are much more tasty. The flowers add color to salads and most say are better tasting than the leaves. But both leaves and blooms are full of Vitamin C and A. The blooms are often candied or added as a garnish and are pectin rich. These are more often used in syrups, brews, teas, wine, and salads. Having said that, the leaves especially are full of saponins and when eaten in excess can lead to digestive issues.

Herbalists have used violets for insomnia, epilepsy, pleurisy, ulcers, eye inflammation, rheumatism, as a laxative, as cough medicine, pain relievers (due to the presence of salicylic acids such as in aspirin), and for treating cancers. The heart shaped leaves led to another name: Heartease, for the idea drawn from the Doctrine of Signatures that it would be good for treating heart illness. The Doctrine of Signatures is a belief that some higher power (god) placed upon the earth cures for most illnesses and placed a sign or signature to let people know what they were good for. The heart shaped leaves meant that some people believed it would be good for hearts. Not just for illness, but also for love potions or as aphrodisiac.

The Common Blue Violet according to the great North American Ethnobotanist Daniel Moermann, was used by the Cherokee for treating headaches, dysentery, colds, coughs, boils, and used as a spring tonic and for blood disorders. They also used it to keep insects out of corn.

The Common Blue (Confederate) Violet is the state flower for Illinois, New Jersey, Rhode Island, and Wisconsin.  Although common, there's much more to these spring blooms than meets the eye. For more on this neat plant, please check out this Capital Naturalist YouTube Video:  https://www.youtube.com/watch?v=GWS_luiX9uM