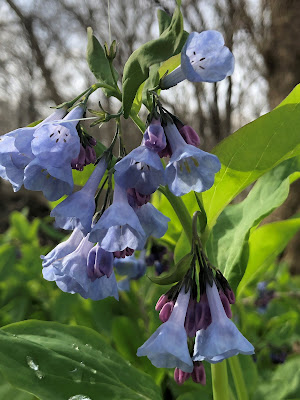 This plant is named after the German botanist Karl Mertens (1764-1831) by Linnaeus. A true ephemeral, this perennial wildflower of riparian or moist woodlands, grows to 2ft tall and then disappears after the trees leaf out. Although blue-flowered most of the time, there are some color variations, particularly in large populations like you have at Riverbend Park above Great Falls and Bull Run. There you sometimes get pink or white ones for example. Some people claim that if you have patches of white flowers it is due to environmental conditions, whereas if you have one white one amongst many blue, it is likely a genetic variation. It should be noted that the buds generally start off pink before blooming anyways. Virginia Bluebells have always been popular with people. The first seeds were believed to have been sent to England in the late 1600's, but they didn't succeed in establishing any until 1730 when John Custis sent some " mountain blew cowslip" from Williamsburg. Thomas Jefferson grew them in multitude on his plantation in Monticello, earning them the name of " Jefferson's blue funnel plants."

According to ethnobotanist Daniel Moerman, there were a few medicinal uses: The Cherokee used it for treating whooping cough and tuberculosis. The Iroquois used it as an antidote for poisons and to treat venereal disease. The name of "lungwort" suggests its use a lung treatment that was applied to several members of the Genus. Another of its common names suggests its use a food plant: Oysterleaf, although I do not think they taste like that, likely it is one of the other species in the genus that gives it the name. The flowers are said to also be edible. Bluebells can be outcompeted by invasives such as lesser celandine.

In my experience, the primary pollinator seem to be bumblebee queens (the stamen and pistil are too far apart for self-fertilization) and other long-tongued bees, although others claim that butterflies and sphinx moths are the primary. I have seen both tiger and zebra swallowtails nectaring at them. However, more and more, I see the introduced Hairy Footed Flower Bee Anthophora plumipes using bluebell flowers each year. Hummingbirds have also been noted as using them.

Doug Tallamy lists 3 Lepidoptera (butterfly/moth species) as using it as a host plant for their caterpillars. By hanging downwards, the plant likely has evolved to protect its nectar from rain washing it away and also loses the petals rather quickly after pollination, increasing the chances that pollinators visit new, unpollinated flowers and not waste time with fertilized blooms. In cultivation, it is generally interplanted with later emerging plants such as ferns that will fill in once the leaves die back. It also is often planted at the top of sloping areas when possible where it will generally reseed itself along the way down and form clumps. They can form large colonies both in the wild and in cultivation. The flowers are bell-like with 5 petals fused into a tube hanging downwards. The plants emerge a purple leaf color before turning to green, a common trait in the Borage family. This plant gained the Royal Horticultural Society's Award of Garden Merit.  A beautiful wildflower, people should go look for them during the first or second week of April (usually) to enjoy them at their peak.