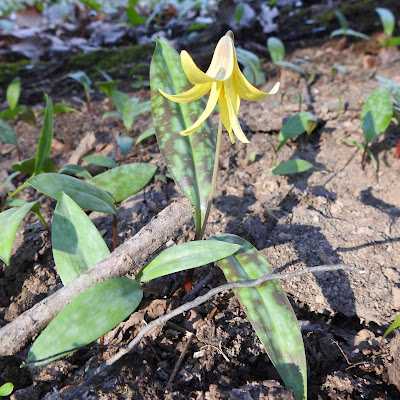 So here’s a little bit on a common spring wildflower, the Yellow Trout Lily Erithronium americanum. There are 2 other local species: White Trout Lily E. albidum, is rarer, washes down from the mountains to find niches along the rivers and has less mottled, grayer leaves usually; and the other is Dimpled Trout Lily, E. umbilicatum, is also more mountainous and prefers more acidic, infertile soils. This plant goes by a variety of different names: American Trout Lily, Dogtooth Violet, Fawn Ears, Fawn Lily, Adder’s Tongue, Yellow Troutlily, Yellow Trout-Lily, Yellow Lily, Yellow Bells, Yellow Snowdrops, Amberbells, Yellow Bastard Lily, Rattlesnake Violet, Rattlesnake Tooth, Yellow Snakeleaf, Lamb’s Tongue, Snake Root, Star-striker, and Scrofula Root to name a few. The variety of names is due to several reasons. See if you can figure out which ones listed above are due to the fish-like mottling of the leaves (along with its appearance when the fishing for trout was said to be the best)? How about the snake-like mottling of the leaves or the appearance of a snake-like tongue when it blooms between its 2 leaves? Others think the pattern is more fawn-like, thus some of those names. How about the supposed dog-like shape of the roots (corms), at least in Old World members of the genus? Since only those plants with 2 leaves bloom, you get the comparison to ears. The last name hints at its use to treat a skin condition. They are true lilies and not violets though despite some common names. The Genus name Erithronium refers to the red color of some of the European species. Naturalist John Burroughs is said to be the first to use the names Trout-lily and Fawn-lily. All in all, quite a few names it can go by.

Although they can be quite abundant and form an ephemeral groundcover, very few plants produce flowers, some say about 1%. Some say the secret supposedly lies not only in how healthy and old the plant is but also that it must make contact with a hard surface like a rock. Some can therefore go very deep (going deeper each year up to a foot down) and few in a colony actually flower. It also is believed that it takes plants up to 8 years to store up enough energy to bloom. It spreads quickly though asexually underground using "droppers", a tubular fleshy stem growing from its parent bulb (corm). The anthers (the part of the flower that produces pollen) can range from yellow to brick red. People are studying why there's such a variation in these colors. Like many flowers, they close up when it gets dark and point downwards anyways to protect the nectar and pollen stores. It is a spring ephemeral, the leaves and flowers dying back as the trees leaf out and it can't get as much sunlight. Some colonies are said to have been dated to 300 years old, so again age and health is more likely why only certain ones bloom. The sometimes vast groundcover of single leaves are said to be good at holding back soil and controlling soil erosion. They prefer to grow in fertile wooded flood plains.

The flowers have 6 backward pointing recurved tepals, a combination of petals and sepals that protect the buds. Bumblebees and the Trout-lily Mining bee Andrena erythronis (a species which prefers this plant for its pollen) are the main pollinators, but even then only 10% of pollinated plants produce seeds. For when it actually does produce seeds in a seed capsule, this plant relies on ants to help disperse it. Like about a third of our spring wildflowers, this is a myrmecochorous plant. It grows an elaiosome on its seed coat which certain species of ants find delectable. They take the treat and discard the seed, often in a rich and protected area where it will have a better chance of growing. Few other wildlife feed on it, though deer sometimes do. Some think the small size and mottled leaves help to hide them from herbivores on the forest floor.

As for ethnobotany, the Genus had lots of uses besides treating the skin for scrofula. Country lore says a tea could be made to rid yourself of hiccups. It was often used in North America by herbalists to induce vomiting and has been used in many types of poultices to treat ulcers and tumors. A tea was made by some tribes for stomach ailments and some roots were eaten as food (the Japanese species is said to be used quite a bit in food dishes). Ethnobotanist Daniel Moerman adds that the Cherokee used the root as a fever reducer and for fits of feinting, while the crushed leaves were used to treat wounds. They would also use it ritually, supposedly chewing it and then spitting it into the water to help them catch fish. Moerman also relates that various Iroquois tribes used the roots as a contraceptive in addition to its use as a skin treatment. The Winnebagos ate the corms (roots) after boiling. Old world species were supposedly used by Roman soldiers for sore feet. 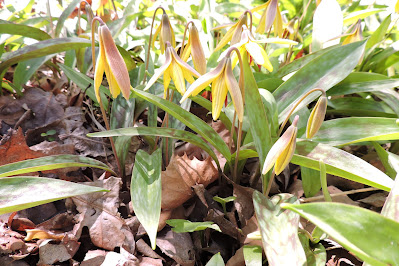 Truly there’s more to this wildflower than meets the eye, no matter which name you choose to call it. So keep an eye out for it this spring now that you know a bit more about this wild neighbor who carpets our forests but only hangs around in the spring.