A hobby of mine is fossil collecting, and many do not know that many fossils can be found right around the DC region, especially after rough weather in winter like we had last month. Even fewer people know that we have state fossils and dinosaurs. While I have not collected any state dinosaurs, I have collected our state fossils.
The first fossil ever described from North America also happens to be the state fossil of Virginia: Chesapecten jeffersonius. It was first described from the shores of Virginia in 1673 and is a Pliocene Scallop. While I have found many pieces of this fossil, I have not found a complete one. I must admit that the one pictured here is a fossil Chesapecten, but not the species that is our Virginia state fossil. The real deal has 9-12 ribs and the whole one I have pictured has more than that, but otherwise looks the same. It is another fossil scallop in the same genus and very similar, but not the exact one.
The Maryland state fossil is a predatory snail, the Miocene Ecphora gardnerae. It has distinctive color and ribs, so I think I'm safe in saying I have the right ones pictured. It was recently reclassified, with the old name being Ecphora quadricostata, again referring to the 4 most distinct ribs, or "costae."
Both of these can be found along the shores of the Potomac and some other large waterways by beach combing. The hard part is finding a good location and then finding a whole piece. I have not been lucky enough to find either states' official dinosaur - yet. I also have not found Washington DC's official "state" dinosaur, the "Capitalsaurus." If I ever do, that would most certainly be a great and appropriate post for Capital Naturalist.

Posted by Capital Naturalist at 3:30 PM No comments:

﻿﻿ ﻿﻿      Wood Ducks (Aix sponsa) are among the most beautiful ducks in North America. Although some spend the whole winter around here, most continue to migrate farther South, particularly when the water freezes or when the weather is unfavorable, as it has been this season. This is the time of year they find their way back into our area and seek nesting boxes or tree cavities to raise their young. Lack of nesting sites is the main thing that limits their numbers in many places. They may sometimes try to nest twice in a year (the only native duck to normally do so). If they do not find a suitable cavity to nest in, they may even dump their eggs into another female's nest.
Wood ducks feed on a variety of things, from insects to duckweed. I've even seen a flock of 30 or so descend onto a cut corn field as the sun set, a beautiful sight to behold. Their favorite food definitely are acorns however. They have proportionally the largest eyes of any of our ducks, perhaps aiding them to see in dark woods or even at night, as they search for food or danger.
Hens lay 10-15 eggs on average, in a tree cavity or nest box. These hatch in about 4 weeks and the fluffy young then use their clawed feet to climb to the cavity entrance before jumping to the ground or water below, regardless of the height. I've been lucky enough to see this happen twice and it is quite remarkable, as they bounce off the ground or make small splashes in the water.
The second part of their scientific name "sponsa" refers to a "beautiful bride." Frankly, I think both the hen and drake make a handsome couple as they give their haunting call in the woods or along our rivers, searching for a place to raise their young.
Posted by Capital Naturalist at 11:18 PM No comments:


Spotted Salamanders (Ambystoma maculatum) are our largest local salamanders, with some reaching up to 10" in length. They are dark and usually have two irregular rows of light colored spots. They are "mole salamanders" spending the majority of their adult lives underground in other animals' burrows, but need to come out at least once a year in order to breed in their natal vernal pools. These temporary ponds are the only location many vernal pool wildlife species such these have a chance to survive. This is due to the relative lack of predators, specially fish, which of course could not survive in a wetland that exists only temporarily. They emerge to take advantage of the ephemeral ponds at the first relatively warm rains of spring, often in early March around our area.


White spermatophores (sperm packets) laid by the males during the night along the pond bottom often signal their presence even before any egg masses are laid. These masses contain 200 or so eggs a piece, are normally attached to a twig or other aquatic vegetation, and are firm holding their shape if removed from the water (unlike wood frog eggs). The egg masses themselves start off either white or clear before often developing a symbiotic algal covering (Oophila amblystomatis) which is particular to this genus of salamanders.


The gilled larvae that emerge develop quickly, feeding off of other vernal pool species, even each other, as they race to metamorphose into adults and leave the pond before it dries out. Some years this can number many, others none. Luckily the salamanders are long-lived (one is known to have lived 27 years) so that enough good years make up for the bad years, as long as their woodland habitats and vernal pools both continue to exist.


Many naturalists and other nature lovers eagerly await the occasional "big night" when vernal pools species such as wood frogs and spotted salamanders emerge en masse and migrate to their natal pools. Having been lucky enough to have seen this natural spectacle, I can tell you they are well worth waiting for, a true sign of the new birth of spring.

Posted by Capital Naturalist at 5:48 PM No comments:

Some ID tips for our Local Native Pines 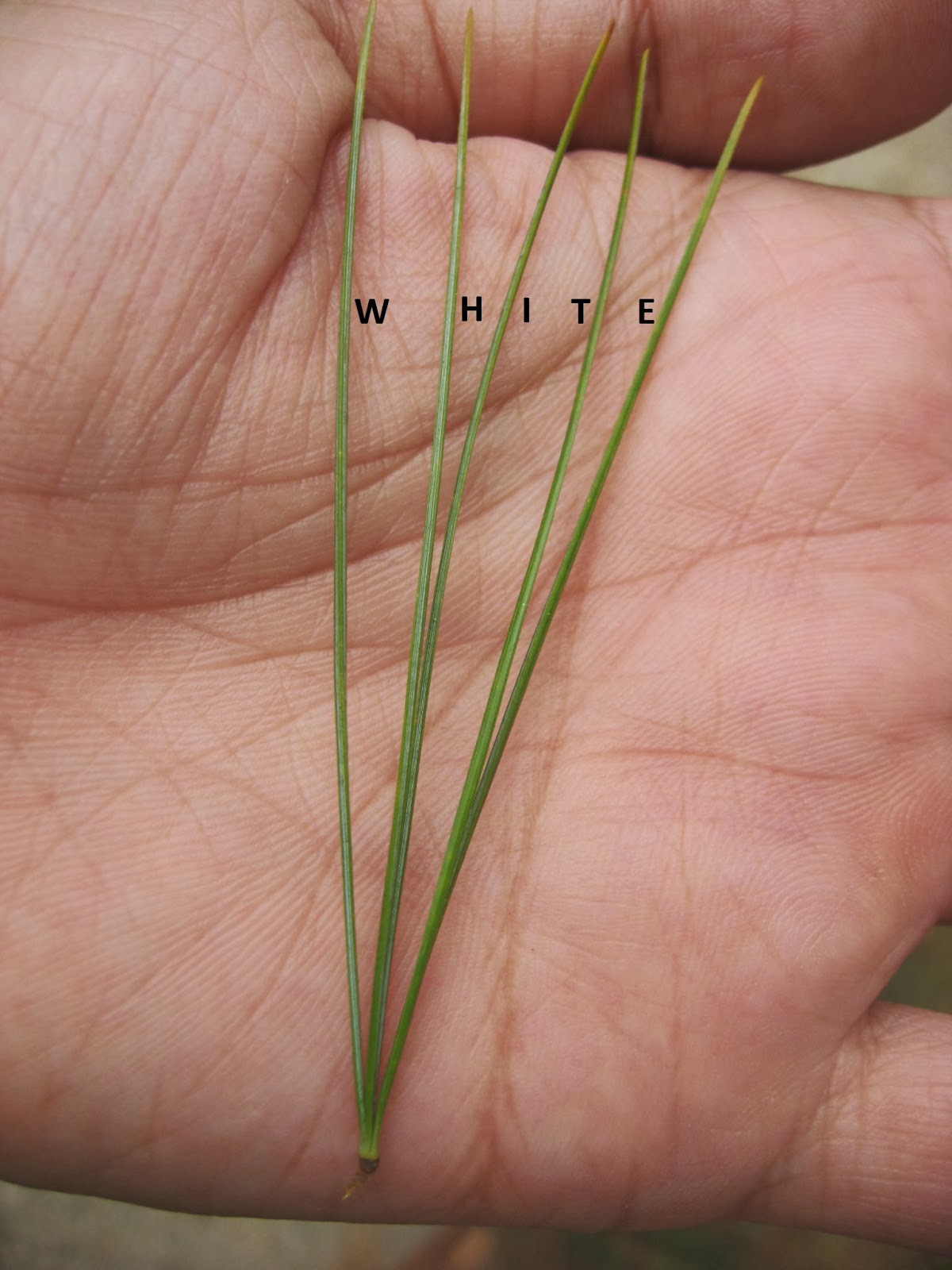 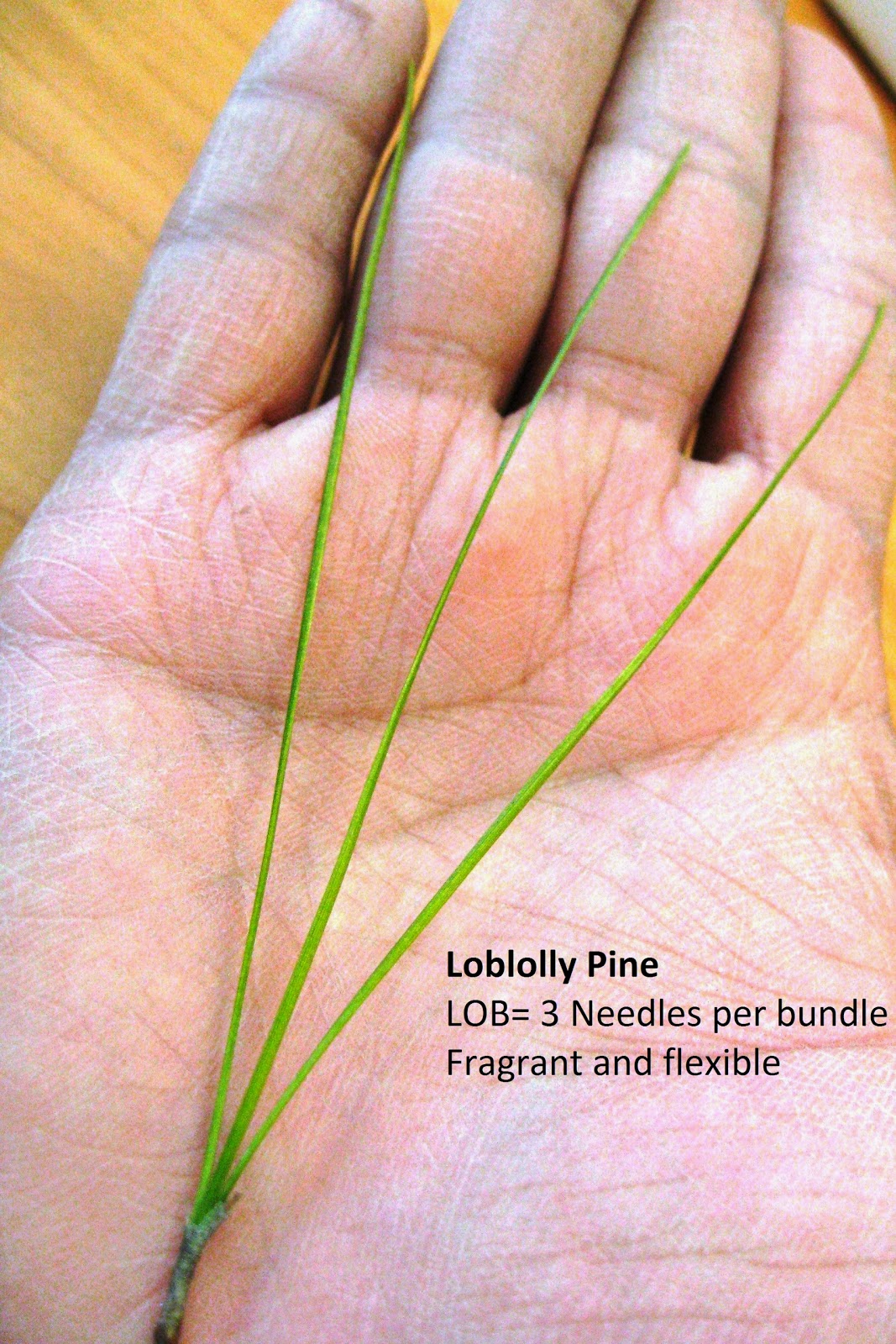 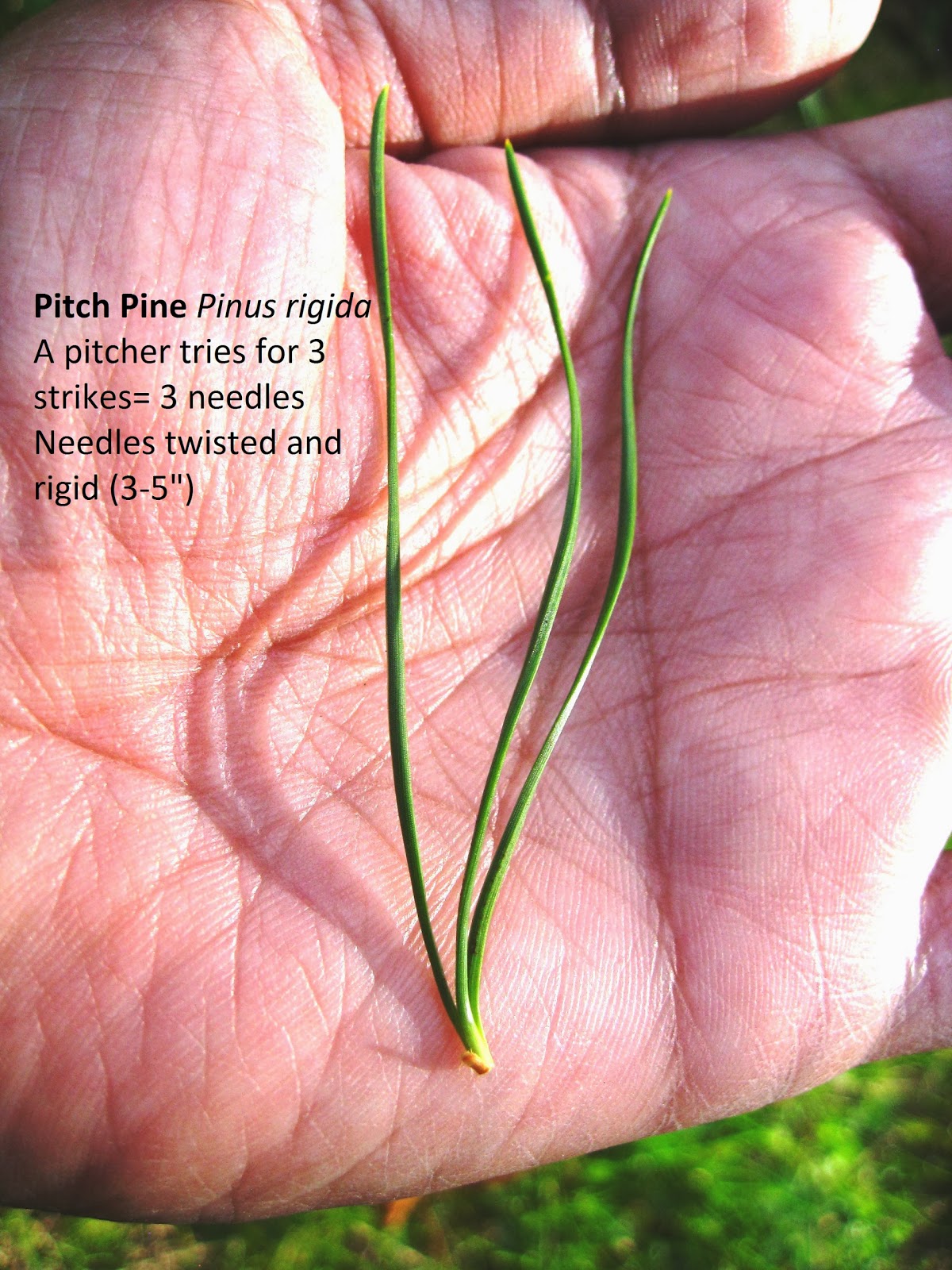 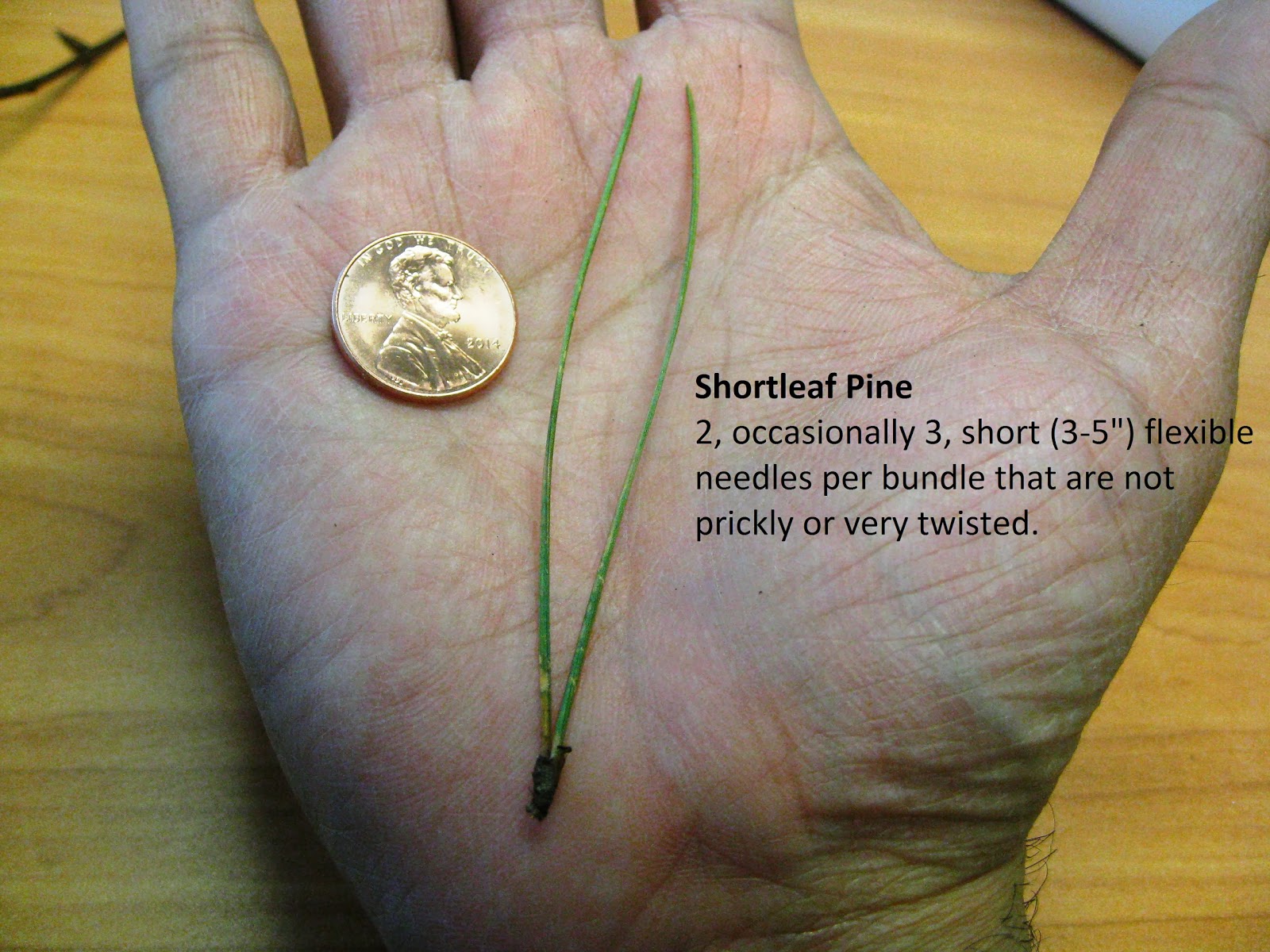 Virginia or Scrub Pine (Pinus virgininiana) is our most common locally native pine. Each bundle (fascicle) has 2 short (1.5-3"), stiff and twisted needles with prickly tips. If you assign one letter for each needle you get "VA" for Virginia. They also form a "V" for Virginia as well thus proclaiming its name.
Eastern White Pine (Pinus strobus) is a commonly planted native pine tree as well as the largest. The 5 needles (2.5-5" long) per bundle are soft and flexible. By assigning a letter to each needle you get W-H-I-T-E spelling out its name.
Loblolly Pine (Pinus taeda) is a common native pine that is also planted widely. Each fascicle has 3 stiff (but flexible) and fragrant (especially if crushed) needles 4-9" long. You can assign one letter for needle to get "LOB" as a clue.
Pitch Pine (Pinus rigida) is not very common locally. Its 3 needles per bundle are rigid (thus its scientific name) and twisted, 2.5-5" long. It can grow fascicles (and cones) even on its trunk. One way to remember it has 3 needles is that "a pitcher tries for 3 strikes" corresponding to each needle.
Shortleaf Pine (Pinus echinata) is not often found locally. Each fascicle has 2, sometimes 3, needles per bundle on the same branch. The needles are short (3-5") and flexible, lacking a prickly tip.
These clues will hopefully help people remember how to identify our locally native pine trees.
Posted by Capital Naturalist at 10:20 PM No comments: