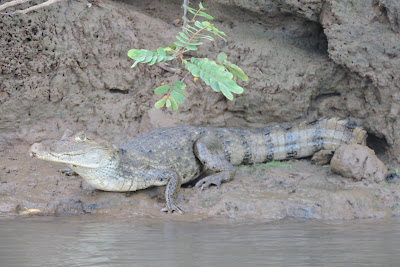 I've been lucky enough to have had several encounters with Spectacled Caiman (Caiman crocodilus), the most recently on my trip to Central America. I've never seen so many as I have at Cano Negro near the Nicaraguan border. There were hundreds of them, specially emerging at night. Shining a flashlight on the water resulted in an incredible display of eyes glowing back at us. So I thought I'd tell you a little bit about them.

Spectacled Caiman are the most abundant of all 25 of the crocodilian species. They're also called Brown, Common, or White Caiman, and have 3 subspecies. They range throughout both Central and South America. They've also been introduced (often as released or escaped pets) into Florida, Cuba, and Puerto Rico where they did not occur before. 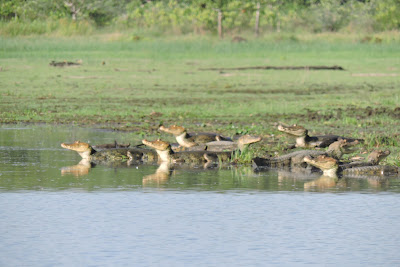 Spectacled Caiman do not get as large as other crocodilians. Males are larger and get to about 6.5 feet long. Females get to about 4.5 feet. They average 3-4 feet and 60 lb in general, but one was recorded at 8.2 feet and 128 lb. Their most common name comes from a distinctive bony ridge between the eyes which look like spectacles. Adults mostly have a grayish green coloration, but can get much darker during colder weather.

Caiman have a varied diet, often depending on their own size and what's available. When small, they will eat insects, crustaceans, molluscs and other invertebrates. When they get larger, they prefer fish, but will eat waterfowl, mammals, and even each other. It's this generalized diet which has helped them to adapt to different habitats. They mostly feed at night.

Though they may look intimidating, attacks on people are extremely rare, and when they occur, are almost always defensive in nature. In fact, they almost always flee when approached, as I know first hand. They do not even attack when you'd think they have a good reason to. I can give you 2 examples.
On the first occasion, my wife Lucy and I were fording the Rio Frio on horseback. The water was about 3 or so feet deep when the horses were wading through, and we had to lift our legs to keep from getting too wet. Caiman, as usual, scattered as soon as we got close. At one point, Lucy's horse actually stepped on a medium sized caiman. The horse startled slightly and the caiman thrashed a bit as it swam away. Although it had every reason to bite, it never even tried to.
On another occasion, we were on a night excursion. We saw huge numbers of caiman every where. Our guide, one of the local cops, took us to an area used as a creche, a place where baby caiman all congregated for safety under the watchful eyes of female caiman. With our guide's permission, I caught a baby. I've handled crocodilians before and knew how to do so safely so as to not get bit. The little reptile though started squealing for help like they often do. Though this normally elicits a protective response, no mom showed up to defend it. Spectacled caiman really do try to avoid confrontation when they can.

Female caiman are protective mothers however. Reaching sexual maturity in 4 - years, most caiman mate during the dry season. Females build nests during the wet season, mostly from vegetation, laying up to 40 eggs depending on the mother's size. The eggs hatch in 65-105 days, again heavily influenced by temperature. The decaying plant matter helps warm the eggs. Those eggs exposed to temperatures over 89 degrees Fahrenheit typically become females, lower than that and you get males.
The young are normally yellow in color with black spots. Babies congregate in certain areas in creches. Females take care of not only their own young, sometimes even carrying them on their backs, but of the others in the same area. Despite this excellent maternal care, predators such as tegu lizards, coati, and large water birds eat many of them. 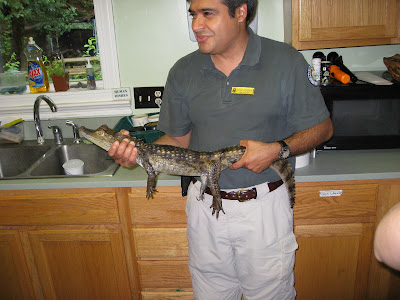 If they survive to adulthood, they are relatively safe from many predators. Though larger caiman, crocodiles, and jaguars take their share, man is their main threat. But because their skins have hard plates called osteoderms and their relatively small size, the market for their hides is much less pronounced than for other crocodilians. But the sides do yield some leather and hunting for food or out of fear does take place. Though their numbers are low in some countries such as El Salvador and Peru, in most others they are steady or growing. They are considered a species of least concern and in some places are legally harvested.

If nothing ends up happening to them, it is believed that they can live up to 75 years. Indeed, they have spread their range and are even considered invasive in such places as Florida and Cuba. The population in Florida really got established in 1992 after Hurricane Andrew allowed the escape of many captive specimens.
But in their rightful environment, these are truly remarkable species, one that I always enjoy seeing in the wild. Here's a short video from the Capital Naturalist YouTube Channel showing them in Costa Rica: https://www.youtube.com/watch?v=mBGnt1RDSLw


For comparison, and much larger and rarer, here's a short video on my encoutnter with a Black Caiman while in a dugout canoe in Peru:
https://www.youtube.com/edit?o=U&video_id=kO_lF7UkRi8

Posted by Capital Naturalist at 12:36 AM No comments: