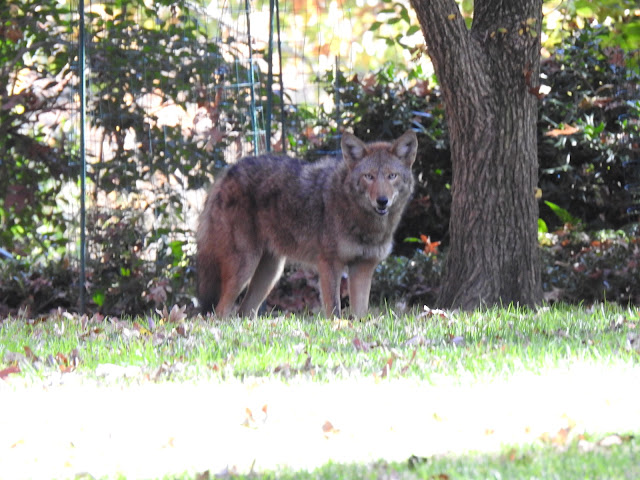 Our Eastern Coyote (Canis latrans) is a recent arrival with an interesting story. It was first noticed around 1930 or so spreading East near the Great Lakes, as Western Coyotes wandered over and took over the areas vacated by most gray wolves. They mixed with Algonquian Wolves and continued to travel, mixing along the way with dogs as well. What resulted was a mix of about 60% Western Coyote, 30% Algonquian Wolf, and the remainder dog, though these averages can vary. They are now found in every county in the mid-Atlantic.
The Eastern Coyote is bigger than those in the West, about the size of a border collie or even German Shepherd, often between 45 to 55lbs, though occasionally bigger. The males are usually larger than the females. They are not only larger, but often tend to be more quiet than their western cousins, not howling as much, and often in much smaller groups. They're color can be variable as well, though they're often some shade of tan, with erect ears, bushy downward-pointing tail with a dark tip. Most have white chins as well.
Coyotes are opportunistic feeders, including vegetables and fruits in their diet along with meat. They are great scavengers, often eating roadkill deer. They rarely take down adult deer, unless the deer is injured or otherwise ill. They will however see any small pets as food, particularly outdoor cats, when they find them wandering off in the woods. This is just one more good reason among so many to not let cats out.
Coyotes are remarkably shy and avoid people any way they can. Most are rarely seen, and certainly are no danger to people, unless they are very sick. If you do think that the animal is sick, you should call Animal Control. Coyotes will usually run away at the first site of any people. Now if you do encounter a coyote, that is obviously not sick, clapping of hands, yelling, throwing things, shaking a can with pennies, are all ways to get the animal to run away. You should never feed coyotes, or leave food out for other animals such as cats. That can lead to them becoming accustomed to people, which can be bad for the coyote and people. Here is an example of a coyote that has become accustomed to people:
.
People have been living near coyotes for a long time, though most have no idea that coyotes are around them due to the coyotes' shy nature. If you do see a coyote, consider yourself very lucky. Most have no idea that they are around at all, especially since they are mostly active at night. See below an example of one investigating a fox den and the lights from a game camera, all in one of our urban parks:
Posted by Capital Naturalist at 12:42 AM No comments: