Posted by Capital Naturalist at 12:20 AM 6 comments:

Every year people ask me about different nuts they find. Hickory nuts (Carya species) seem to always come up. While I'm no expert, I thought I'd give a few pointers on telling them apart that mostly works for me. Consider it a short introduction into hickory nuts. If you plan on tasting any, I'll give a few pointers. The universal rule for most nuts is to float test them first. Take their hulls off and drop them in the water. Those that float have air in them, likely from insects, and are not worth either planting or eating. The ones that sink are the most likely to be viable and have intact meat in them. While not perfect, it works most of the time.


The easiest to identify is the Pecan (though many people don't even know that it is a hickory), since many people have eaten the shelled version before. However, Pecans are not really native to the DC area, being more of a Southern tree. Some folks though have planted it locally. Since it tends to not self pollinate very well, the few trees that do produce usually only yield a few nuts around here. The sapsuckers really like to get at the bark it seems too. If there are more than one tree, then you're in luck. I had several trees growing outside of my dorm room in college (William and Mary), but since the locals knew the timing better than I did for getting the nuts, I was pretty unsuccessful in getting much. It's a long nut with well defined ribs that stretch from end to end and has more meat to it than any of our other hickories. They are considered the best tasting. Below are a few photos of Pecans.

One of the most noticeable hickory nuts around here is the Mockernut Hickory. The nuts are big and light colored since the hulls split early to drop the light colored fruit. You usually just find the nuts themselves already out of their hulls. They are considered edible, but there's a good reason they're called mockers. Though by their size they promise a good yield, after cracking them you find very little meat in them to eat. They mock you by how little nut meat you get after you work so hard to crack them. Often the nut is so hard to crack that what little was in there is broken up and seems to yield even less than you could ever imagine. Below are some photos of Mockernuts themselves.

Much larger and producing much more edible nuts is the Shellbark Hickory. This is has the biggest nuts of all our hickories, and the fruits are quite tasty and yield good amounts of meat.  This species though really isn't native to the DC region however and so is even less common than Pecans around here, few people knowing what it is and therefore not bothering to plant it. Since you're a bit unlikely to find it, I won't write any more on it, but you can find out more if you wish from this Capital Naturalist Blog article I penned on it previously:

Shagbark Hickories are also large and said to be edible. They also are not local, being found more in the mountains than in DC. The trees themselves are easy to tell apart due to their shaggy, peeling bark. Below are some photos to help you identify this hickory.

Much more common and fairly easy to identify is the Pignut Hickory (Carya glabra). The nuts tend to retain their hulls even well after falling from the tree. They do not have very well defined ribs and the hulls don't split as often more than just a bit down the nut. More importantly, they have what I like to think of as a "snout." Now, this is not why they're called pignuts, but that helps me to remember how to recognize them. While some folks consider them edible, their name comes to them due to most folks believing they're fit for hog food. Their flavor is supposed to be quite variable, but that's assuming you find viable and edible nuts. My experience is that they are often infested with weevil grubs and thus often empty or buggy. When scouting for hunting locations, I often find tons of these lying on the ground, but a quick inspection usually results in many of the hulls having the telltale hole of a weevil. I think twice as to whether or not to try and hunt such an area as it doesn't have as much food for wildlife as you think you see. Below are some photos of Pignuts.


Much less common and often not recognized is the False Shagbark Hickory. It goes by many other names as well, such as Sweet Pignut, False Pignut, and Red Hickory, (Carya ovalis). It is indeed quite easy to confuse with some of the other hickories and most people are not even aware that it exists around here.The easiest way to identify it I've learned is by its nuts. They have fairly well defined ribs and tend to split about halfway along their seams down the nut. Whether it has a hull or not, look at the tip though. If it looks like a tied-off balloon end, then you have C. ovalis. Said to be much better tasting than pignut and the hickory nut that follows, I've yet to try one, though I'm not sure why. I'm going to make it a point this season to do so. Below you'll find some photos that hopefully will help you identify it.


Another very common hickory is Bitternut or Swamp Hickory (Carya cordiformis). Its nuts are said to be ill tasting, thus its common name. They're fairly small as well. The round nuts tend to hang on to their hulls, which also are extensively ribbed but only about half way down the nut. That is their best identifying feature in my opinion, though others point to their downy yellow buds as the way to go. The nuts do have little points to their ends, but not as extensively as the pignut or sweet pignut. The photo below may help with identification.

So that's a quick down and dirty look at our local hickory nuts and how I tell them apart (most of the time). Hopefully these clues can help you as well. 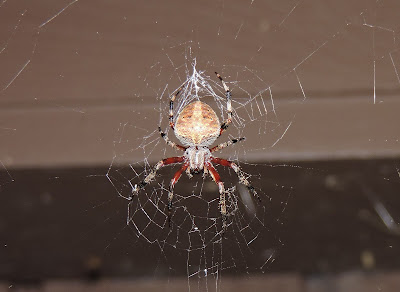 Among the largest and most commonly seen spiders in the Fall are the Spotted Orbweavers (Neoscona crucifera and less commonly Neoscona domiciliorum). With webs that can be over 2 feet wide and their tendency to attach them at just above eye level to structures such as buildings, these seem to call attention to themselves this time of year.
During the earlier part of the year you likely never noticed them. Not only were they much smaller as spiderlings, but they hide during the day. They would tear down and consume their webs every morning, so you often didn't notice their webs they constructed nightly. They did this to avoid daytime predators such as birds or wasps from finding them. Mud Dauber wasps for example often sting and paralyze many of these when they're young, stashing them in their mud nests as living paralyzed food for their own babies.
But by Fall, they're often too big for wasps to eat. Many wasps have also concluded hunting and egg laying by this late in the year. So the spiders sometimes hang out during the day. Many birds also don't go after them as much, having no babies to feed or they themselves leaving on migration South. Prey also gets scarcer as it gets colder, so leaving the web up during the warmer day increases the chance of a catch. Consequently, Spotted Orbweavers don't hide as much and also don't tear down their webs and rebuild them at night as much once autumn arrives.
So while there are definitely fewer of them around, they're bigger and hide less. They also often choose to build their webs around our porch lights and buildings, as the artificial lighting attracts insect food to get snared in their webs. They now stay out more often and tear their webs down less, all the way until the first few frosts kill the adults. Their webs are good at intercepting all sorts of aerial or jumping prey.


Spotted Orbweavers and other members of their Genus Neoscona (which mostly look similar) are sometimes called Barn Spiders. That name however is better applied to another large orbweaving spider, Araneus cavaticus. They look quite similar but these are much less common in the DC region. They have wider "shoulder" and lack the broken "L" shape (the spots that give them their names) on their abdomens that Spotted Orbweavers posses.


Their scientific name has interesting origins. Eugene Simon, the person who named the Genus as Neoscona in 1864, was just 16 years old when he did so and not good at speaking Greek. Finding one "in the reeds spinning a web", he meant to say just that, but instead the name he gave it translates to "spinning a reed." Despite the goof, the Neoscona name stands. The specific epithet "crucifera" means "cross bearer" due to the shape the markings often take. Some call it a Hentz Orbweaver Spider as the person finding this particular species was named Hentz. In fact the previous accepted scientific name for it use to be Neoscona hentzii. To make names even more confusing, another very similar spider, Nescona domicilorum ( meaning "house dweller"), which is a bit more brightly colored and has other difficult to see differences is also called the Spotted Orbweaver. Luckily as far as life style, they both are much the same so what I write here pretty much holds for both.


These are large spiders and so easily seen in the Fall near our buildings and sometimes causing concern. But they are relatively harmless to people, only biting under duress. Though almost all spiders have venom, many cannot even break the skin. This one does get large enough to potentially do so, but a bite is rare and supposedly only results in a tiny bit of temporary pain or maybe swelling.
The web, as mentioned, is generally 5-8 feet high and often 2 feet across. They often use existing structures like buildings for support. Other wise they're a typical orb web, with concentric circles and with sticky spoke web connections. The spider hangs head down in the middle when hunting (though they can hide in a corner or in a folded leaf when scared, making use of the hidden retreat). While both males and females make webs when young, the males stop making them when they become adults and instead go in search of a female.
Once they mate, females usually lay a single egg sac holding about a 1000 eggs that is commonly hidden nearby in a folded leaf or other cover. There they overwinter and baby spiderlings are born in the spring, often throwing silk into the air to parachute away and create their own orb webs.
I get many inquiries about these spiders "showing up" by porch lights and buildings in the Fall, the people not knowing the spider has been hiding there all summer, venturing out at night to build its web before recycling it by eating it in the morning. It's only now that people notice these larger adult orbweavers, not realizing they benefited from the spiders catching prey the whole summer long, never causing a problem and very unlikely to cause any now.