Please note the beginning of National Invasive Species Awareness Week (February 25 - March 3). Invasive species are non-native organisms that, often because they're free from natural controls they had in their native lands, cause ecological, economic or human harm in the new lands they've been introduced into. They often have several traits in common besides freedom from their original natural controls. They often for example reproduce very quickly and out compete native fauna and flora. Though some, such as many exotic invasive plants introduced for the horticultural trade, may look harmless, they can cause great harm. The National Wildlife Federation estimates that 42% of threatened and endangered species are at risk due to invasives.
Arlington County, like all our region's jurisdictions, recognizes these threats. In fact, page 21 of the Arlington County Board approved Natural Resources Management Plan has this statement: "Invasive plant species represent the greatest and most immediate threat to the continued survival of Arlington's natural lands and native plant communities." Arlington, like so many neighboring jurisdictions, has committed many resources and efforts to manage invasives.

Again like many jurisdictions, Arlington has an Invasive Plant program as part of our Natural Resources Management Unit. It has a dedicated budget and a rolling 10-year invasives managment plan based on ecological priorities and citizen interest to maximize our limited resources. You can find out more about it here:

https://environment.arlingtonva.us/trees/invasive-plants/invasive-plant-program/
Arlington's program uses mechanical, biological, chemical, and cultural methods to manage invasives. In addition to staff and contractual services, the County also depends heavily on volunteers to help. Called RiP (Remove Invasive Plants), the volunteer program has weekly events and dedicated, trained volunteers. We invite you to participate (through the link above) and also note that a great many other jurisdictions have similar programs, including many that call themselves Weed Warriors.
Many environmental groups also have their own programs they use to cooperate with local governments. One such program was launched by the TreeStewards and Arlington Regional Master Naturalists. It focuses on calling attention to the problems English Ivy causes. You can check out the "Choking Hazard" brochure here:
https://arlingtonva.s3.dualstack.us-east-1.amazonaws.com/wp-content/uploads/sites/13/2013/11/choking-hazard-brochure.pdf.

There are also several regional efforts and resources available. One such resource is the Mid-Atlantic Invasive Plant Council (MAIPC) in which Arlington staff serves as the Virginia state representative. You can find out more about it here: http://www.maipc.org/ and you can check out the excellent invasive plant lists they've developed here:
https://www.invasive.org/maweeds.cfm
Much more locally is the newly formed NoVA PRISM (Partnership for Regional Invasive Species Management). Arlington applied for and was awarded a matching $140,000 grant to form this multi jurisdictional partnership. Arlington hired and housed the coordinator and oversaw the grant. It includes not just governmental partners but also groups and businesses, such as master naturalists, Earth Sangha and Dominion Energy. It is centered along the whole 45 miles of the W&OD Trail. The grant aims to map habitats and come up with an invasives management plan for the trail. It featured multiple pilot projects to create meadows in Arlington and Falls Church and to foster cooperation between all the partners.
Arlington is also on the steering committee for the newly forming NCR-PRISM (National Capital Region Partnership for Regional Invasive Species Management). This is the expansion of the existing DC Cooperative Weed Management Area to include more of the region and to expand its efforts beyond just invasive plants. It will focus its efforts on a new program sponsored by the Department of Interior's National Invasive Species Council (NISC) called  "Invader Detectives." Arlington staff was also involved with assisting in developing this program which will hopefully later on go nation wide if successful in the DC area. It will feature citizen scientists looking for potential new invasives of all types on watch lists so the principles of Early Detection, Rapid Response can be tried.
To throw yet more terminology out there, EDRR (Early Detection, Rapid Response) is the principle that the best way to deal with exotic invasive species is to do so when they're detected early enough that they do not have a firm foot hold yet. Eliminating invasive species while they have not yet gotten established is the most cost effective way as the population is small and the odds of success in keeping the problem from spreading is best.
This can really work. Here's an example. Arlington County has the dubious distinction of being the first location in Virginia for a potential new invasive shrub, Castor Aralia (Kalopanax septemlobus) in June of 2012. We however quickly eliminated it before it spread and got established (it had been in a 15' colony) and we have not seen it again since. We were lucky it had not spread more where control efforts could have been much more costly and the ecological damage done much worse. More on Arlington County's EDRR program can be seen here:
https://environment.arlingtonva.us/trees/invasive-plants/invasive-plants-early-detection-rapid-response/.

Hopefully this blog article has helped to make you more aware of invasive species and the local efforts to manage them. As you can see there are lots of ways to get involved and get better informed. To find out even more about National Invasive Species Awareness Week, webinars and events check out the website: https://www.nisaw.org/.

Posted by Capital Naturalist at 12:27 AM 2 comments: 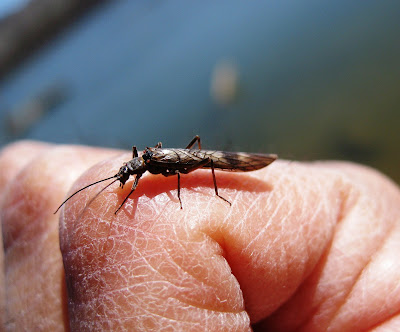 Most insects, being ectothermic or not being able to regulate their body temperatures internally, are not commonly seen in winter. However, being active in winter can certainly have its advantages. For one thing, there are much fewer predators about with most birds having migrated to warmer climes to search for invertebrate prey and most bats also not being active. Any insects having evolved to come out in the cold of winter would have less predators and competition. So it should come as no surprise that a few insects have indeed evolved to to take advantage of the situation.
One such group of insects are the Winter Stoneflies. Winter Stoneflies are insects in the Order Plecoptera (from the Greek for "twisted or braided wing" due to a twisted region of their hind wings). The Winter Stoneflies are made up of two families within that larger group: Taeniopterygidae (sometimes called Willowflies) and Capniidae (also called Small Winter Stoneflies or Snowflies). Taeniopterygidae consists of 35 species in 6 Genera in North America while Capniidae are one of the largest families of Stoneflies with 60 species in 10 Genera being found in North America though over 300 worldwide. In my experience however most of the ones I encounter in the DC area seem to me to be Taenopterygiidae in the Genus Taeniopteryx.
Stoneflies are not actually flies but in their own order of Plecoptera as already stated. True flies have only two wings and thus their Order is called Diptera meaning two-wings. Stoneflies have 4 wings. While many other insects are also called flies it should be pointed out that when used properly in a common name, when the word fly is attached to the first word it is not a true fly. So dragonflies, damselflies, butterflies, caddisflies and stoneflies are not true flies. When the common name consists of two words then they can properly be called true flies when they have the 2 wings that all Diptera posses such as house flies, bee flies, fruit flies and crane flies.
Stoneflies in general are poor fliers and Winter Stoneflies are no different.They tend to stay down low where they also can find cover and warmer temperatures. They also are mostly very dark in color likely to help them absorb whatever heat there is. While most Stoneflies are nocturnal Winter Stoneflies are just the opposite and are most active on warm sunny days.Their greatest adaptations to cold however are the myriad of glycols, glycerols, proteins and sugars they posses which act as a sort of antifreeze within their bodies.
Stoneflies are associated with water. While adults like sitting on rocks and stones, giving them their common name, the young are completely aquatic (at least all those in North America) and are called nymphs. Stonefly nymphs are flat with what look like two tails (called cerci) and tufted gills near the base of their legs. They stay on the bottom and like to hide under and among rocks.

Stonefly nymphs in general like cool clean well-oxygenated water. Most do not tolerate pollution. They are thus considered good bio indicators of clean water. Those folks who have conducted macro invertebrate stream monitoring may may well be familiar with EPT. E= Ephemeroptera (Mayflies) P= Plecoptera (Stoneflies) and T=Trichoptera (Caddisflies). As all these macro invertebrate organisms are intolerant of polluted water their presence is a good bioindicator of clean water.  Stoneflies are among these indicator species looked for in stream surveys. Of course sensitivity makes them vulnerable as well and the Xerces Society lists at least 3 winter Stoneflies as seriously imperiled in localized areas in Idaho and Colorado.
Stonefly nymphs depending on the species can take from 6 months to 3 years to mature into terrestrial adults. Most only grow during colder months going into a dormant non -growing state called diapause during the the hot summer months. Although some Winter Stonefly nymph species are predatory on other aquatic insects such as mayflies, most feed on plant material and detritus, the typical 'shredders' and detritivores of fallen leaves in streams and rivers. Once the nymphs make their final molt into terrestrial adults, many species do not feed at all though some, especially Capniidae feed on blue green alga or lichen.
Adult Winter Stoneflies for the most part have an interesting way to find mates. They drum their abdomens against surfaces. Males start the drumming, each species with its own beat and preferred locations and drumming surfaces until females like their beat and drum back. They drum to each other until they find the one with just the right beat. After mating, females deposit their eggs, up to a thousand per female, into the water to start the cycle all over again.
Adult Winter Stoneflies can emerge in large numbers, often called a hatch. Though there are fewer predators around, these large hatches can also overwhelm those that are around, flooding the habitat and ensuring that not all can be eaten. This brief abundance of food though can also be a real boon for predators. I recall one winter watching a phoebe that had not migrated engorging itself when it suddenly found itself in a large hatch by the Potomac. I had wondered if it was going to make it through that winter but the huge influx of food seems to have been a life saver.
Fishermen also know that large WInter Stonefly hatches are one of the things that can bring listless fish such as trout back into a feeding frenzy. As one of the first foods available to them in large numbers, many fly fishermen try to "match the hatch" in their best imitations of the floating insects. Around the country some dry fly ties (imitation floating feather and hair lures in such small sizes as 16- 20 size hooks so light they actually float on the surface) are tied to match the prevalent species "Hatching" that day. Some of these imitation "dry flies" have such names as Montana Stone Yellow, LIttle Black Stone, Skwala, and Yellow Sally. For fishermen who are dying of cabin fever this maybe the first hopeful sign that the spring fishing season is almost arriving. To me that maybe true as well, but I also just enjoy seeing a winter insect out and about in an otherwise often dreary season. Since they like to land on our warm bodies, they make their presence easily felt. So take a walk along a waterway on a relatively warm day and see if you can find some hopeful insect sign on a dreary day as well.