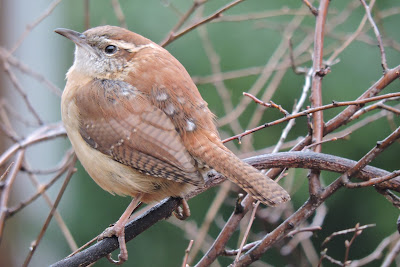 Carolina Wrens (Thryothorus ludovicianus) are common birds who are beneficiaries of warming temperatures. They've steadily been spreading their range northwards and westwards now for decades. Their ranges quickly contract when hit by harsh weather. Ten subspecies are now recognized, 6 North of Mexico. Their scientific name translates from Greek and Latin into "reed jumper" "of Louisiana." Of the 9 wren species, Carolina's are the second largest in the USA, with males being slightly larger than females on average.
These 5.5 inch birds are quite active. They have a white eye brow and tip their tails up, specially when alarmed. They're also quite vociferous, with the male giving a distinctive "Teakettle, Teakettle, Teakettle" song regardless of season. Both males and females also give alarm, scold and other calls year round, the pair often vocalizing together. Here's an example of a male giving its call:

Pairs often mate for life and defend their territories from other wrens and even other birds while nesting. Both sexes build the nest, though the female chooses the nest site and usually puts the finishing touches. Nest sites tend to be less than 10' high and are often slightly domed, but that's where the similarities end. They've been known to nest in all sorts of unusual places. While they may utilize cavities and bird boxes, they will also nest in all sorts of other locations. I've found them in flower pots (specially if they've been tipped sideways), mail boxes, and air vents. They've also been documented in brush piles, pails, coffee pots, baskets, roots, old hornet's nests, dense shrubbery, discarded cups, brush piles, pockets of clothes, and pails, among others.
The female lays 4-8 creamy eggs on average and takes on the majority of the incubation. In 12-14 days, the eggs hatch. In about 2 weeks, the young fledge. The male often finishes raising the young while the female starts to nest again. Two to three broods a year are normal. They are common victims of brood parasitism by cowbirds, suffering 25% nest loss in some locations, though most of these are for the first nesting. Wrens often have better success in subsequent nesting attempts that same year.

Wrens feed mostly on insects and invertebrates, 94% of their food consisting of these, particularly while nesting. In many locations, spiders make up a significant portion of their diet. With a bit of luck, they have been known to live over 7 years.
Being year round residents and being so vocal, these are birds I enjoy in all seasons. They are not shy and make their presence known all year long. No wonder they have been chosen to be the state birds for South Carolina. 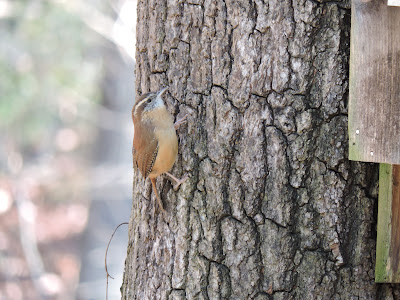 Posted by Capital Naturalist at 11:58 PM No comments:


Many people love birds and try to their best to help them out. This often takes the form of providing bird feeders, but there are much better ways. Planting native plants actually provides much better food (and cover) than setting out seeds. Since 97% of our terrestrial birds (and all our bats by the way) feed on insects, and native plants result in over 4 times the number of insects, this is truly best way to provide nourishment. Indeed, experiments done locally have shown that yards with nonnative plants cannot support as many birds even with bird feeders around. Baby birds have been found in yards landscaped with nonnative plants dying with crops full of seed, since what they really need is the protein and other nutrients insects and other invertebrates provide. Even birds such as hummingbirds and finches which are known to feed on nectar and seeds respectively need to have insects to feed their young. They cannot fledge successfully with out them.

But there are many other ways to make your homes more bird friendly. Some are quite obvious such as keeping cats indoors for the protection of both the pet and birds. But another way to make your yard safer for birds is to try and keep birds from colliding with windows.

According to the American Bird Conservancy, bird collisions resulted in deaths estimated at between 300 million to 1 billion in 2013 in the USA alone, second only to cats as far as anthropogenic threats. While much has been written about birds crashing into tall buildings at night or from wind turbines, this isn't the most common manner of avian strikes. About half of all collisions are due to home windows, with the peak occurring during Fall migration and during the day. This is due to the large amount of glass found in houses that is present low to the ground where vegetation grows. Add bird feeders and unfamiliarity with the habitat while migrating and you have a recipe for window strikes. Something as simple as having window screening would go far in reducing fatalities due to less reflection and a buffering effect.
Bird friendly building design includes reducing exposure of glass, minimizing the amount of glass used, and including some kind of signal on or in the glass. These can have additional benefits such as energy use reduction, less glare, and added security or privacy. Actions as simple as installing window screen and closing shades or otherwise covering glass when not in use are extremely effective. The American Bird Conservancy provides numerous examples of bird friendly glass on their website. This included adding bird tape and hanging silhouettes or other things to the outside of the glass. The vast majority of strikes are also limited to the height of the vegetation. So even modifications or efforts to prevent crashes in tall buildings need not necessarily be undertaken on the upper floors or at great expense. They need only be as tall as the surrounding vegetation.
Many people are familiar with the dark hawk silhouettes that have been used on windows to try and keep birds from colliding with them. Some believe this is due to birds being afraid of the hawk shape on the glass. In reality, that's not the reason these efforts reduce bird strikes. Any shape that helps make the surface standout works just as well. Many window decorations can therefore be used to reduce bird crashes. In some nature centers I've worked at, we would change the window decorations seasonally. Whether colored leaves in the fall or winter snow flake shapes attached to the outside of the glass were used, they all helped keep birds from accidentally smashing into the glass. The best results are when the shapes are placed 4 or so inches from each other.
So go ahead and be more bird friendly. Plant native plants, keep cats indoors, and do what you can to make your windows safer. Whether you install window screens, close your shades, or attach some decorations to the outside glass, all can help reduce bird collisions.