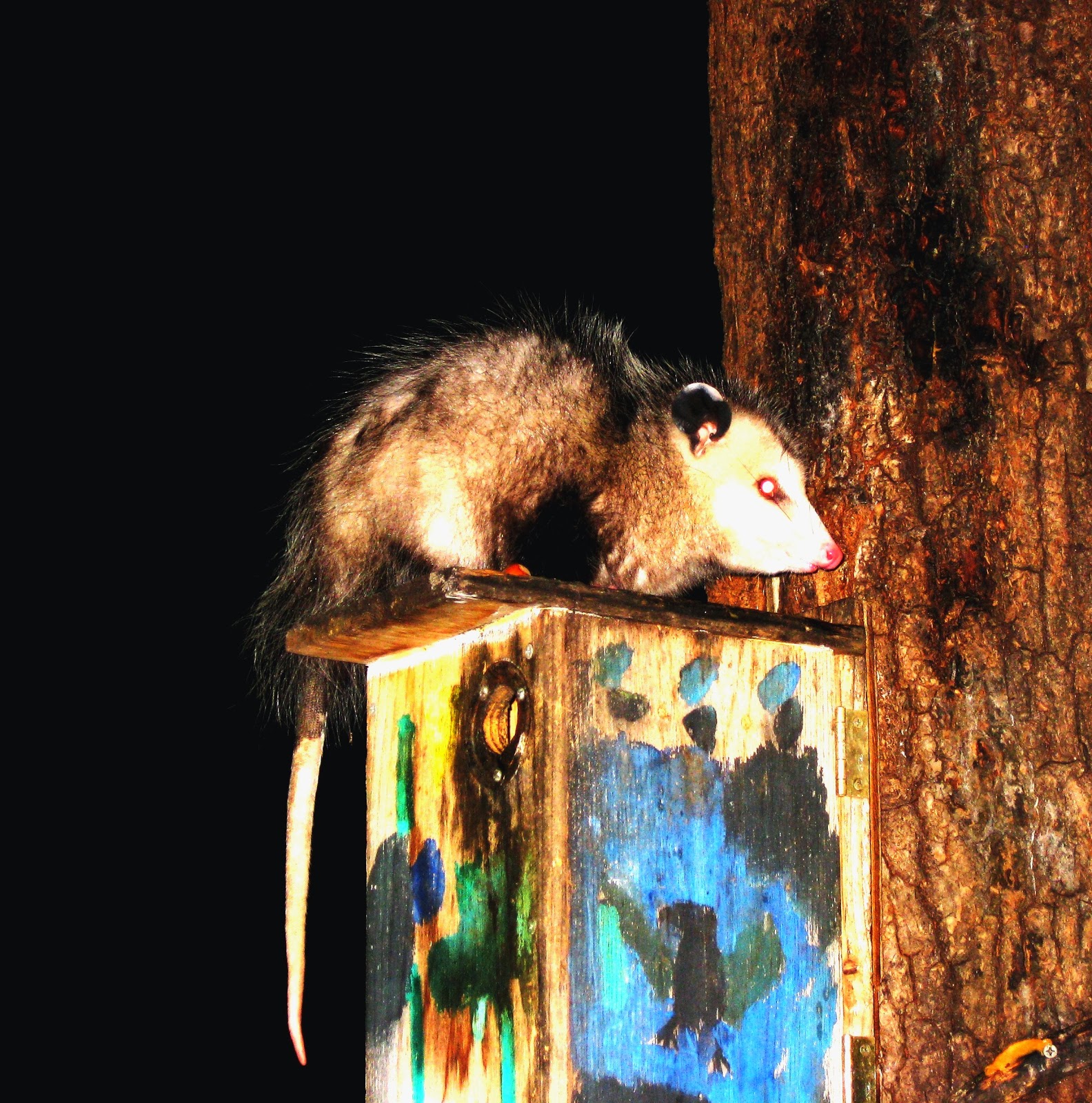 The Virginia Opossum (Didelphis virgininiana) is a fascinating native mammal with many unique characteristics. Even its names are uniquely Virginian, with the word "Opossum" being derived from a Virginia Algonquian Indian (Powhatan) word meaning "white animal" that Captain John Smith heard in 1608. Although sometimes just referred to as "Possums," that term technically is supposed to be applied to a certain group of marsupials in Australia.
The Virginia Opossum is North America's only marsupial. The females (called "jills") give birth to as many as 25 young after only about 13 days gestation. These poorly developed young (called "joeys") then have to crawl their way into the jill's pouch ("marsupium") and find one of the 13 available teats (all of which do not always produce milk). The mortality rate is high.
Even if they make it to cat-sized adulthood 2 months later, opossums have a very short life span for a mammal their size. Most only live for 1-2 years, and a 4 year old one is considered ancient. Both the jills and "jacks" (males) are unable to reproduce after their second year also. Those that have lived to an old age in captivity have been prone to obesity, but have been able to be litter box trained.
Although a group of opossums is called a "passel," they are usually solitary wanderers. They have home territories, but tend not to sleep in the same location more than a few days at most. They have been slowly spreading North, but are ill equipped for the cold. In fact, they have poor insulating fur and are prone to frostbite, especially on their hairless ears and tails.
Opossums have more teeth (50) than any other North American mammal. They also have an opposable big toe (hallux) on their hind feet unlike any other native animal. Their prehensile tails are also unique, but they are not strong enough to truly hang by them. It really acts more like an extra hand and to sometimes help carry things.


But opossums are probably best known for the catatonic state they sometimes involuntarily fall into, "playing possum." This fainting spell can last for several hours, with the teeth bared, saliva drooling, eyes half closed, and a nasty odor being expelled. While in this state, they are semi-stiff and can be moved with out their being aware of it. This behavior is actually an unusual defense mechanism and rarely happens, especially in adult animals. I have only been witness to it once in my life, but was that memorable. The one I found first tried to get away, but then turned and showed its numerous teeth, hissing. I was very surprised when it just then tipped over and "died."
The Virginia Opossum is not appreciated very often, many people just considering it a big, dumb "rat." But they have some incredible adaptations and are very special in so many ways. This has allowed them not only to survive for 70 million years, but to actually thrive and expand their range, often times into our yards and cities. This is something to keep in mind next time you find one of these nocturnal animals, the awesome opossum.

Posted by Capital Naturalist at 7:15 PM