Many of the white flowers that are found in abundance in our open fields and road edges at this time are Queen Anne's Lace (Daucus carota ), sometimes called Wild Carrots. Our modern carrots are indeed descendants of a subspecies of this plant.
This plant is normally a biennial, flowering in its second year before it dies, but it sometimes takes 3-4 years for it to bloom if growing conditions are poor. It often grows to 3 feet tall and starts blooming from the outside of its flower cluster towards the middle, often blooming for a month or longer. Once done, the flower head dries and curls inwards. This resembles a bird's nest and the plants indeed are sometimes called Bird's Nests.


Like our modern carrots and so many other members of the parsley/carrot family, they are edible, or at least the  roots are when young and before they get woody, However, some other members of the family also have similar fern-like foliage and white flowers in flat clusters (umbels) but are actually poisonous (such as Poison and Water Hemlocks). There are differences though, and none have the carrot-like odor to their roots. If you do decide to try them, please make sure of your identification and also note that some people get a rash after handling the leaves if they are out in the sun, a common trait when skin is exposed to chemicals found in many members of the carrot family. 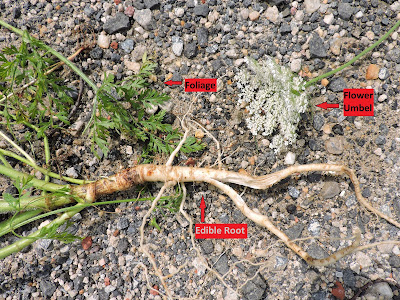 Queen Anne's Lace is not native but has naturalized here from Eurasia. In fact, in many areas it is considered invasive, particularly in open, sunny areas with clay soils. It of course was eaten in its native lands, but was also used as to obtain a cream-colored dye derived from the flowers. It had been cultivated in a variety of root colors originally ("carrot" is derived from a Celtic word for "red" for example). Orange though now is the color we associate with most commercially available ones. This came about, it is believed, due to the 16th century Dutch who bred them this color in honor of the royal House of Orange.
It's common name supposedly came about from an ancient legend. Queen Anne (either of Great Britain or Denmark depending on the version of the tale) was said to love to make lace. While "tatting" (making lace by hand), she supposedly pricked her finger and a drop of blood fell onto its center. The lace she was making became the white flowers of Queen Anne's Lace, with the reddish/purple sterile central floret most of the plants are adorned with being the spot where her blood droplet fell.

While this plant is not native and can in some locations even be considered invasive, it is here to stay. It can be beneficial as well. Some people know how attractive it is not just to many pollinators, but also wasps that can prey on insect pests. It is even recommended as a companion plant to certain crops by some farmers. One creature that has benefited is the Black Swallowtail Butterfly. Its caterpillars use many members of the parsley/carrot family for a host plant, including Queen Anne's Lace. So many interesting things to know about this common field plant that is often not even noticed unless it is in bloom.

Posted by Capital Naturalist at 12:52 PM