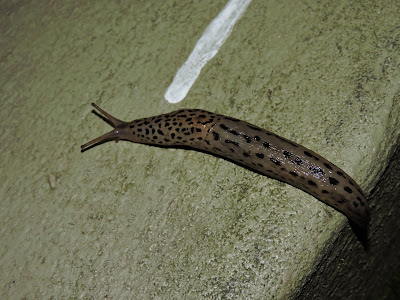 Leopard Slugs (Limax maximus) are common garden residents which many of us have seen before. This is a bit surprising since they are not native to North America but rather are originally from Europe. Thanks to their ability to live with humans and to travel with agricultural products, they have been accidentally introduced into many parts of the world. They go by a wide variety of common names such as Great Grey Slugs, Great Garden Slugs, and Tiger Slugs.
Though quite variable in color, they normally have spots and can attain large sizes (up to 8 inches, though 3-4 inches is more common). Their scientific name literally translates to "biggest keeled slug." Though quite big, there are bigger slugs, even in the keeled slug family (called this due to their slightly roof-shaped last third of their backs). Among our local species though, none get to their size.
Leopard Slugs have a most unusual mating system. First of all, they are all hermaphrodites. Each slug has both male and female sexual organs, though they cannot mate with themselves. Rather they suspend themselves by a mucus rope they form, pair up, and mate while hanging in the air.

These acrobatic sexual antics lead to some interesting looking eggs. The first time I found some, I had no idea what they were, looking like little glass BB's or beads. I raised them in a tank to discover what creature made them and was rewarded less than a month later by tiny slugs.


It takes Leopard Slugs about two years to sexually mature and they can live a little over three years total. They have a strong homing instinct, usually returning to the same place to hide every night. They are primarily nocturnal and are quite the omnivores. They can feed on a variety of things, both living and dead. They can eat detritus, pet food, and even pet poop. They can feed on carcasses, fungi, and unfortunately garden plants. Leopard slugs are also cannibalistic, sometimes chasing down other slugs to eat. Since they are larger and faster than our native slugs, I suspect that is why we usually only find these and not many other types.


Now before you go reaching for that salt shaker or setting out that stale-beer slug trap to drown them, lets recall that these beasts have been with us for a long time. First recorded in North America by George Washington Tryon in 1867, they've been spreading at a snail's pace (they are after all snails with out complete shells, though they retain a small shell under the shield-part of their bodies) and are here to stay. So, sure you might try to control some if they become pests, but there will always be more, following their slimy trails back and forth faithfully through your gardens and lawns.

Posted by Capital Naturalist at 5:19 PM