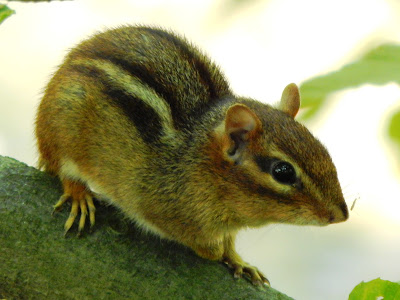 The Eastern Chipmunk (Tamias striatus striatus) is the familiar striped ground squirrel we encounter on many of our woodland walks. Since they will soon become less common, going into torpor and sleeping for large parts of the winter, I thought I'd write about them now. They are not true hibernators, waking every few weeks to feed on warmer winter days, but most are hidden in their underground burrows by December.
As mentioned earlier, these are ground squirrels, the only members of the subgenus Tamias and having 2 fewer teeth than other chipmunk species. Almost all chipmunk species are found in North America, the only exception I'm aware of being the Siberian Chipmunk. The sole local representative we have is the Eastern Chipmunk. Being squirrels, they all can climb, though they prefer to stay on or under the ground. I've seen as many as 4 at the same time up in a single Bird Cherry tree picking fruits however. The photo below shows one in the low branches of a shrub.


These are small rodents, usually under 10 inches including the tail, and weighing under 5 ounces. Eastern Chipmunks are strictly diurnal and are extremely active during their waking hours. They are also quite vocal, chipping, chirping and otherwise sounding off in the woods. Some think they're called chipmunks because of the chipping sounds they make, but it is more likely that their common name is derived from either Ottawa or Ojibwe words that were corrupted to "chipmunk." Their Native American Indian name is supposed to mean "one who descends trees headfirst."
Their stripes are a distinguishing feature and there are several legends concerning how they got them. My favorite is a Haudenosaunee (Iroquois) tale relating how the chipmunk, never lacking for something to say, challenged a cocky black bear. The bear was proud and thought there was nothing he could not do, so the chipmunk challenged him to keep the sun from rising. When the bear failed to do so, the chipmunk loudly chattered with mirth and told all the other animals of its failure. The bear was so angered that it pinned the chipmunk under its paw, proclaiming that though perhaps it couldn't stop the sun, it could keep the chipmunk from ever seeing another sunrise. The chipmunk begged for a chance to say a last prayer, if only it could get a bit of breath to do so. When the bear raised its paw ever so slightly, the chipmunk ran for its burrow. The bear was quick enough for one last swipe with its claws, leaving 3 striped scars forever on the chipmunk's back.
Because Eastern Chipmunks are not true hibernators, they need to collect much food to have ready over the winter. They cache large stores of nuts, seeds, and bulbs for their regular forays to get food. They keep several stores at the ready, just in case another animal finds their hoard and steals it.
These underground stores require a great deal of food collecting. They do this by carrying the seeds and nuts they find in cheek pouches back to their larders. They can expand their cheeks up to three times the size of their heads, filling them one cheek at a time. They can carry 5 peanuts at a time. The famous naturalist John Burroughs studied one individual chipmunk over three days and said it carried off "...5 quarts of hickory nuts, 2 quarts of chestnuts, and a quantity of shelled corn." That's right, in THREE days. For a short video of one collecting seeds and nesting material, please check out this video from the Capital Naturalist YouTube Channel:

Because they are storing the seeds and nuts all in single locations and destroying the seeds as they need them, they are not very good at dispersing seed. They do however also eat a fair amount of mushrooms and fungi and are thought to disperse those spores quite a bit. Chipmunks also occasionally eat insects and raid birds nests, but not that often.
Chipmunks are very vociferous. They make a variety of calls in addition to the alarm call we often hear when one spots us and takes off running for its burrow. One such call is only given for a very short period of time (maybe a day) when the female is in estrus. For a short video of one giving this call, check out the following:
https://www.youtube.com/watch?v=Lm5MmdA6_WQ

Female chippies mate with multiple males before giving birth to up to 8 (but 3-5 is much more common) young. Gestation is about 35 days and it takes about 40 days for the young to be weaned. They normally mate once a year around here, but we're far enough South for second brood occasionally. If lucky, they might make it to 8 years old, but 1-2 years is much more the norm.
Chippies have lots of enemies. Foxes, hawks, owls, large snakes, weasels, and especially cats get many of them. Cats are a particular danger because chipmunks are creatures of habit. They will use the same logs or trails to run on almost every time. Cats figure this out and stalk those routes. The cat might miss several times, but the chipmunk will keep using that little route over and over again, often ending up as a cat kill to bring back to its owner, to eat, or just dump after playing with it a while. They can spend a lot of time ambushing the same area repeatedly that many of our native predators cannot afford to do.
I really like these little ground squirrels, always have. These days I occasionally find their greedy little raids a bit much (I mean how much bird seed from the feeder can it really eat?). I also hate it when they find my wild strawberries and serviceberries, as they make off with tons of them. They seem to know that they're safe under the net I put over the plants to keep the robins and starlings at bay on occasion (I've since just given up even trying). But overall I love watching them in my yard.

We've been lucky enough to see them raise their young at my house, and there might not be anything cuter. I must admit that in my misspent youth we did some dumb things including trying to catch them. For some reason, we never got bit, though we managed to catch a few, I'm not sure why. I also remember one particular day when one ran up inside the pants leg of my father's best friend and hunting buddy when trying to escape a hunting dog. Yep, that was funny...  So I'l  wish our chippies a good, long sleep, but expect to see their high jinks again in the spring. 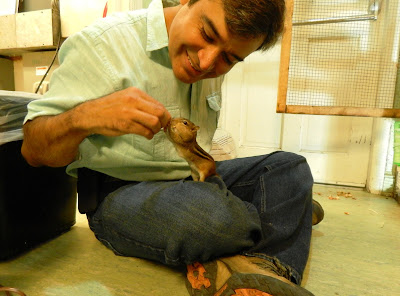 Posted by Capital Naturalist at 8:21 PM