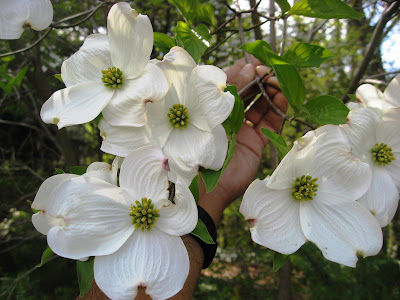 Flowering Dogwood (Cornus florida) is both Virginia's state flower and tree. It serves as the state tree of Missouri and state flower of North Carolina as well. Flowering Dogwoods grow in the understory, rarely over 35' tall, with opposite branching. They are in peak bloom in our area right about now, the actual flowers themselves being quite small, but the "petals" (actually bracts) attracting a lot of attention. If pollinated, they form bright red fruits called drupes. The fruit changes color and matures at the same time that the leaves change color.

This is something referred to as "fall foliar fruit flagging." The bright fall color "flags" birds down who then are able to find the fruits. This gives the short tree an advantage, standing out and having its drupes eaten and seeds dispersed instead of getting overlooked among the taller forest trees. This is a strategy many fall fruiting shrubs use. The leaves themselves decompose faster than most others, returning their nutrients quickly back into the soil.  Flowering Dogwood also has very distinctive turban-like flower buds in winter, which along with the opposite branching and alligator-like bark, makes identification of this tree fairly easy.


The drupes are an important and favored food for birds, being high in fat content. Over 98 species of birds have been documented eating its fruits. Unfortunately, a fungal disease called Dogwood Anthracnose is spread very easily, being picked up by the bird in migration when it stops to eat and then transferred further along the migration route to yet other Flowering Dogwood trees when the bird lands again. This is killing a high proportion of the trees and was likely brought over in the horticultural trade on Asian Kousa Dogwoods which are resistant to the fungus themselves, but can act as carriers and infect the natives.


Flowering Dogwood has a deep ethnobotanical history. Native American Indian tribes made considerable use of it. The Cherokee, among other tribes, for example chewed the bark for headaches, and used other parts to treat for fever, diarrhea, measles, and intestinal worms. The twigs could be used for toothbrushes of sorts and had a reputation for whitening teeth among not just the indigenous people, but Africans whether slave or free, and throughout the South. During the Civil War when the Confederacy was particular short on supplies, Flowering Dogwood was officially sanctioned by Dr. Francis Porcher in 1863 in their official ethnobotany manual as "one of the most valuable of our indigenous plants." It was used by the South in many of the same ways as by the native peoples, but also as a substitute for Peruvian quinine in treating malaria, as a dye, for stomach issues, for durable hand tools, and was preferred in the manufacture of gun powder. One version of how it received its common name refers to its supposed use in treating dog mange, thus "dogwood." Others say the name is derived from the "dags" or dagger-like skewers when people used them for cooking. "Dagger-wood" eventually turned into Dogwood.
As far as legends, here's a follow up Blog article:
http://capitalnaturalist.blogspot.com/2014/05/the-legend-of-flowering-dogwood.html

Here's a short video on Flowering Dogwood from the Capital Naturalist YouTube Channel:

As you can see, there is much more to this plant than just it's good looks. It serves as the caterpillar host plant to 112 different butterfly and moth species. Whether in its roles in feeding our wildlife or traditional medicine, this is a tree worthy of being a state symbol.

Posted by Capital Naturalist at 6:37 PM