Shrubs in the genus Amelanchier go by a variety of names, each with their own stories and lore: Juneberries, Shadbush, Shadblow, Serviceberry, Sarviceberry, Saskatoon, and Sugarplums among so many others. I won't go into details about all these names, but have a chosen a few to tickle your appetites to learn about these great woody plants.

Let's start with the term Juneberry, given to the shrubs because many species have their fruits (a pome in botanical terms) ripening in early June. Most species have not only edible, but delectable, fruits, whether eaten fresh, dried, in pies, or as jam. These are a wonderful treat for wild food foragers like myself (if you can beat the birds and other animals to them anyways). The native peoples often used them as a main ingredient in pemmican traveling cakes, among the many other dishes they were also used in. Francis Porcher's so-called "Confederate Ethnobotany" published during the Civil War provided instructions about how to use the fruits to produce an alcoholic drink also. As if that wasn't enough, the shrubs act as host plants themselves to provide food for 124 different documented caterpillar species, which of course provide even more food for birds (96% of terrestrial birds feed on insects with caterpillars making up the most sought after), our 17 species of bats, and other wildlife. This is indeed a bountiful food source anyway you consider it.
Here's a short video which shows the berries and discusses them:

But these shrubs also provided so many other uses. Some Native American Indian tribes used them for arrow shafts, others for baskets, and even more to construct digging tools. Parts of the plants had numerous medicinal uses, including as eye or ear medicine, for stomach ailments, to treat colds, and as a general medicinal tea. It would take a whole other Blog article to relate the various ways different tribes used these native shrubs.


The names Shadbush or Shadblow refers to the tendency for the shrubs to flower in April, often during the spawning season for fish such as shad. They supposedly served as a signal for people that the fish were running in the rivers and to go fishing.
There are numerous stories attached to why these woody plants are called either Serviceberry or Sarvisberry. One relates to the plants' similarities to the fruit of European plants in the genus Sorbus. Another relates that the shrubs would flower just as the roads became passable again to allow for the preachers who would travel to be able to arrive to once again provide religious services after the winter season had passed. Yet another relates that blooms signaled that the ground had thawed enough to allow for burial services.

Regardless of what name is used, these are truly remarkable and beneficial shrubs. Luckily these adaptable plants are used quite a bit in landscaping and are beautiful when in bloom. We can then enjoy them as edible landscaping in June too. But we really can enjoy these plants any time of year, as can all the wildlife that depends on them. 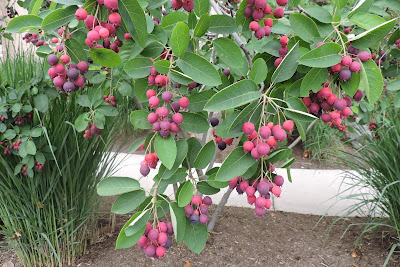 Posted by Capital Naturalist at 4:05 PM