Juncos are common winter visitors throughout much of the USA. These woodland sparrows are quite variable in appearance, especially out West and by region, where some 15 different subspecies and races are recognized. Formerly many of these were recognized as different species, but now they've mostly been lumped together in the East to one species. What were sometimes called Northern, Eastern, or Slate-colored Juncos now are all called Dark-eyed Juncos (Junco hyemalis).
While living most of the year in forested portions of Canada and at higher elevations, they migrate over to become our winter residents. This winter time appearance has given them another common name: Snowbirds.

Once they do arrive though, they're all over. Project Feeder Watch has listed them as the most commonly reported winter bird. They're considered among the most abundant forest birds, with a population estimate of 630 million. Juncos are commonly found in mixed flocks (often accompanying white-throated sparrows and bluebirds in particular) of 10-30 birds. Where the different ranges overlap, several subspecies of different juncos may flock together for the winter. There are definite hierarchical orders to juncos which play out when they're feeding, with those juncos who arrive earlier to a winter territory ranking higher than later arrivals. By the way, there are several accepted names for a flock of sparrows such as juncos. These include calling them a crew, a flutter, meinie, quarrel, or (my favorite) a ubiquity of sparrows/juncos. Be aware though, that few actual birdwatchers use any of these terms, simply referring to them to them as a flock.

While somewhat variable in appearance, juncos tend to be gray and dark along their top half and light colored below, with pale beaks. Their most distinguishing feature though is the flashing of their white tail feathers as they pump them when they fly. The flashing is supposed to serve as both a warning device to fellow juncos and as distraction to any predators following them.
Some dark-eyed juncos do not migrate at all, including some in the Appalachian mountains. These year-round resident birds, like many non-migratory birds, have shorter wings than the ones who fly so far away for the winter. Of those who do migrate, males tend to stay farther North, and the same individuals tend to go to the same wintering grounds each year.
Juncos feed in typical sparrow fashion: hopping along, pecking and scratching for food. They're mostly ground feeders, with 75% of their year-round diet made up of seeds. They're not too picky about the seed types, eating chickweed, sorrel, and lambs-quarters for example. At bird feeders, they usually go for the spilled seed on the ground, preferring millet over larger sunflower. They eat most of their insect food during the breeding season. In fact, like many other primarily seed-eating birds, they feed their own young almost exclusively an insect diet. Interestingly, the insect food at first when given to their young tends to be regurgitated prey.


Once they're back at their breeding grounds, males get very territorial in defending their woodland homes. Females pair up with them, preferring the ones with the flashiest white tails. Nests are normally built on the ground and are well concealed. They tend to be covered over, but can be very variable in appearance. The female incubates the eggs, though both parents feed the 1-2 (rarely 3) broods of young the high protein insect diet they crave. Three to five whitish eggs (with dark smudges on the larger end) are laid, with later nesting attempts having fewer eggs. After 11-13 days, the eggs hatch. The young develop quickly, and though they do not usually fledge and leave the nest until 9-13 days later, can in an emergency run very quickly to escape danger. If all goes well, they may live 3-6 years, though the record  is one that was 11 years and 4 months old that was noted in 2001.
I enjoy the antics of these snowbirds. The flocks are very active and noticeable while they're foraging. They add a lot of liveliness to what can sometimes be a very drab landscape in winter. 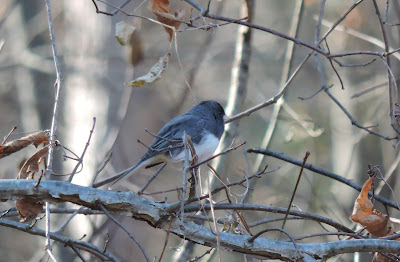 Posted by Capital Naturalist at 3:40 PM