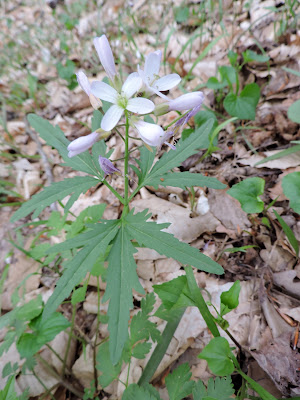 Cut-leaf Toothwort (Cardamine concatenata, formerly Dentaria lacinata) is a spring wildflower of rich, deciduous woods. It is in the Brassicaceae, or Mustard Family. This plant rarely grows over a foot tall. It is an ephemeral, producing leaves, flowering, seeding, and then dying back by the time the trees leaf out and sunlight is no longer available.
Its white flowers have the petals in a cross-shape typical of the "cresses" or mustard family. During cloudy weather and at night, they hang downwards and close, protecting the nectar they hold from rain and the elements. These flowers are pollinated mostly by solitary bees and a few flies.
The leaves on this species are in a whorl of three that grow around the stem all pretty much on the same level. They are deeply divided, thus giving them the "cut-leaf" portion of their name. This trait also was what gave them their former scientific epithet of lacinata. The position and shape of the leaves differentiates them from a few of the other Toothworts that are occasionally encountered, though none are as common as Cut-leaf in the immediate DC area regardless.


The name Toothwort comes from the supposed similarity of its bumpy root to a tooth. This once also helped give it its former Genus name of Dentaria. The suffix -wort often signifies an herbal use, and this plant is no exception. The roots' similarity to teeth was taken as a natural symbol for using it to treat tooth problems, something referred to as the Doctrine of Signatures (that a higher power had left a sign on the plant as to what it was to be used for). Toothworts have been used in the past to treat dental issues by various cultures.
But is has been used for other treatments as well. The Haudenosaunee, whom some call the Iroquois, for instance had numerous uses for it. A poultice of its crushed roots was applied to the head for headaches. It was used to treat colds, wounds, and as an appetite stimulant. It was also used to deal with heart ailments. Interestingly, its current Genus name of Cardamine is derived from a Greek term for a mustard plant that was also used to strengthen the heart.
The Haudenosaunee were said to rub Toothwort on guns, traps, fishing line, and hooks as a "hunting medicine." Some would carry either the root or plant on their person or in their mouths in the belief it could attract women. It was even thought that this plant could be used to help with divination. Of course it could just be eaten as well.
It's use by many people as an edible give it other names, such as Pepper-root or Wild Horseradish. The ground roots mixed with vinegar are sometimes used as in a similar manner as horseradish. Indeed, the roots have been eaten raw, cooked or salted for generations. This of course kills the plant however and so should only be done where it is plentiful or grown in a shady garden.
Toothworts actually are not difficult to grow in rich, shady garden conditions. The roots are easily planted, but hate being disturbed while in bloom. It can also be grown from seed. The seeds though are not always easy to collect, as they hang in pods from pollinated flowers, but split and shoot the seeds a short distance away when they are ripe. It also may take 3-4 years for the plants to store enough energy in their roots to finally flower from the time they sprout from seed.


Despite its short growing season, Toothworts serve as host plants, caterpillar food, for 6 different species. Locally, both Falcate Orange-tips and West Virginia White butterflies use it. For the West Virginia White butterfly caterpillar, for whom it is the most preferred food almost to the exclusion of all others, this has led to its extirpation in many locations.
West Virginia White butterflies come out in the early spring and fly in search of Toothworts. They land on plants when they believe they've found them and "drum" or scratch the surface with their front legs, which serve to also "taste" the compounds within the leaf surface. When the butterfly detects mustard oils, it knows to lay its eggs. The problem is with the spread of the inavsive exotic plant Garlic Mustard.


It grows much more prolifically than Toothworts do, and also secretes chemicals which inhibit the germination of other plants. This chemical warfare by plants is called allelopathy, and is in addition to simply out competing native plants. Slowly Garlic Mustard replaces the natives. For the West Virginia Whites, this is deadly. The caterpillars cannot feed on the similar mustard oils of Garlic Mustard, and so are poisoned and die. As the invasive Garlic Mustard has spread, the butterfly has declined along with its host plant.
Cut-leaf Toothwort, sometimes also called Crinkleroot (though Slender Toothwort is called this more often) or Crow's Toes, might make its appearance for a short time every spring, but is an important wildlflower. Not only does it serve as a valuable food plant for certain butterflies, a nectar source for native pollinators, but has been valued by people for generations, even if only for its fleeting beauty.


Posted by Capital Naturalist at 12:23 AM