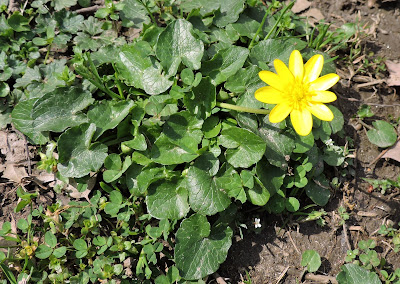 Lesser Celandine (Ficaria verna, formerly Ranunculus ficaria) is an invasive exotic perennial that covers whole section of moist woods and waterways in spring. It can look quite attractive when it carpets the early spring with its yellow flowers (typical of plants in the Buttercup family). Looks are deceptive however, as this plant is quite aggressive and out competes native plants, particular spring ephemerals.
Lesser Celandine goes by many names including Fig Buttercup, Figroot, and Pileroot. Its scientific name Ficaria means "fig" in Latin, while its species name verna means "spring." Pileroot is derived from its use in treating hemorrhoids, which can also be called "piles." It is originally from Europe and western Asia, but after its introduction as an ornamental, has spread to many other regions.
We have an uncommon native plant called Marsh Marigold (Caltha palustris) that can be confused with Lesser Celandine. It is much more common in the mountains, rarely seen around the DC area. It is a taller plant that forms small clumps rather than acting as a ground cover like the Fig Buttercup often does. If in doubt though, just turn a flower over to confirm. Lesser Celandine has sepals (protective petal-like covers that protect the actual petals) which Marsh Marigold flowers lack.


Although Lesser Celandine has been used medicinally, it is poisonous. It contains a compound called protoanemonin, which many other members of the buttercup family also have. It can cause blisters and rashes when it makes contact with skin. If ingested, it can cause nausea, spasms, and even paralysis. It's has proven to be fatal at times to livestock. This has led to it being declared a noxious weed in some states.
But it also has been considered edible by others. The toxic compounds are rendered harmless if dried or cooked. This has led to its use as an herbal remedy and even as a vegetable. In Germany, it is sometimes called Skorbutkraut, which translates to "scurvy root" due to a belief it has high concentrations of vitamin C to prevent scurvy. Many believe this is a case of mistaken identity though with another plant that looks like it, Scurvy Grass (Cochlearia officinalis) and which is also used for the same reason, and actually does have high vitamin C concentrations.
Lesser Celandine is an ephemeral, emerging in late winter and completing its flowering before the trees leaf out and then going dormant until the next season. It gets a jump start against most plants, including other native ephemerals, and eventually crowds them out. Since it goes dormant by summer, the bare patches it leaves often result in erosion. This is also to its advantage as any pieces of its bulbs can take root and spread.


Disturbing the ground and breaking off pieces thus results in it being dispersed. This makes it extremely difficult to control using any mechanical methods. If you try and dig it out, you not only disturb the soil and make it easier for other invasives to take root, but any piece you miss just becomes a new plant. In reality, using herbicides in a judicious manner and at just the right time is the only practical control for this invasive. This is usually when half the flowers are in bloom.


While it may form large spring displays of flowers, this plant is a nasty invasive. It has spread to 24 states and can completely blanket and smother native plants that provide much better, diverse habitat. It is sad to see how it carpets huge areas of what should be native ephemeral wildflowers.


Posted by Capital Naturalist at 11:10 PM