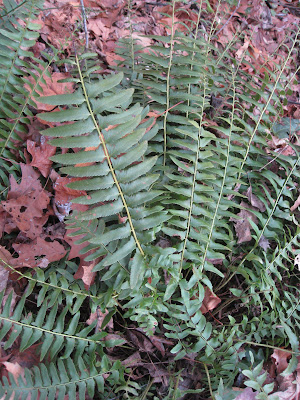 Christmas Fern (Polystichum acrostichoides) is a perennial evergreen fern that grows throughout our region. Because its fronds are evergreen and long-lasting, it was a popular Christmas time decoration, and thus the name. Each individual "leaflet" (pinna) looks a bit like a Christmas stocking as well, something that helps to identify and name the fern. Its Genus name comes from the Greek for "many" and "rows" and refers to the large amounts of fruiting dots (called sori) that release spores on the undersides of the leaves.


This is a very adaptable fern. It can take a variety of growing conditions, though it prefers rich, loamy soil and light shade. Because of its adaptability and evergreen nature, it is a popular garden fern. The root stock (rhizome) is easily divided in the spring and fall to get new plants. Christmas ferns are mostly pest free, though an introduced European aphid, Amphophora ampulatta, sometimes attacks it and other ferns. Even deer tend to leave it alone unless very hungry.
But there certainly are animals that use it. At least 3 native species of caterpillars feed on it for example. Actually, I had some interesting discussions a couple of years back when several people asked me to identify an insect that was folding and tying together Christmas fern fronds. At first I thought they were a kind of Crambid moth called a Serpentine Webworm (Herpetogramma aeglealis) which is a leaf tier that feeds on ferns and occasionally a couple of other plants.


But then I started finding them in several parks, including in some gardens that had several other fern species, such as Cinnamon and Sensitive ferns which are supposed to be preferred host plants for the caterpillar. What was strange was that all the tied-up fern fronds were exclusively on Christmas fern and not on any of the other ferns.
So I did some more research and found out that some folks were investigating a potential new moth species discovery in both Canada and Maryland that exclusively used Christmas ferns. The new moth was officially recognized and named in 2011 as Herpetogramma sphingealis (no common name). This moth is both darker and larger than the Serpentine Webworm. I started seeing the bundled up leaves on Christmas ferns in numerous parks all over the DC area, including in Arlington. I'm now convinced that this is that same species, but will have to rear some this summer to confirm (and send it off to some Lepidopterist-expert friends since the only absolute identification is by dissecting genitalia under a scope). It's quite neat to know that people are still discovering new species, even in very developed areas.


But back to the Christmas fern itself. It's been used by Native American Indians quite extensively. Although many fern fiddleheads (what freshly unfurling fern fronds are called) are edible, apparently only the Cherokee utilized Christmas ferns in this way. The Cherokee also used the roots to treat rheumatism (especially of the hands). A drink was concocted from it to treat fevers, tooth aches, pneumonia, and stomach illnesses as well.
The Haudenosaunee (Iroquois) also made great use of it, particularly to treat their children. Concoctions were used for children's cramps, rheumatism, diarrhea, sore backs, spinal troubles, convulsions, body discolorations, and general listlessness. It has been documented (all these by expert ethnobotanist Daniel Moerman) as being used in adults for speech impediments, tuberculosis, venereal diseases, as a blood purifier, and as a "lady's medicine." The Micmacs and Malecites chewed the roots to treat throat hoarseness.
So this plant has lot of history to it, though now it's mostly remembered for its holiday decor.


Posted by Capital Naturalist at 11:07 PM