Hooded Mergansers (Lophodytes cucullatus) are among the handsomest of diving ducks. They are also the smallest of our 3 mergansers (referred to as "Sawbills" and "Fish Ducks" by hunters due to the serrated edges of their bills used to catch fish and other creatures). Hoodies are about 18" and weigh less than 2 lbs. Indeed only the Eurasian Smew is a smaller merganser. The scientific name is derived from the Greek "lophos" for "crest" and "dutes" for "diver." Their specific name "cucullatus" comes from the Latin for "hood." Their distinctive crests or hoods are a signature field mark and also gives them other names that are sometimes used: Hairy Heads or Puffy Heads.

Hoodies are also only indigenous to North America, rarely straying off the continent as they're relatives occasionally do. The term "merganser" comes to us by way of several languages. "Mergus" is Latin for "diver" while "anser" means "goose." Meanwhile "meer" is Germanic for "sea" and "ganser" refers to a "goose." All mergansers are are diving ducks, tend to be large, usually have crests, and have thin, serrated bills useful in catching prey. Hooded Mergansers are not only smaller, but frequent fresh water much more than any of their other native cousins. It is uncommon to see them in even brackish water as they favor fresh water almost exclusively.
Although Hooded Mergansers are extremely good divers (their legs are set so far back on their bodies that they are clumsy on land) and are quite adept at catching fish, they also ingest more vegetable matter than other mergansers. In general, ducks that feed on vegetation are said to be much better tasting than ducks who feed on fish and other creatures. For a look at a juvenile both in and out of the water, check out this video:

But while Hoodies are considered the least "fishy" tasting and best eating of the mergansers, they are rarely hunted. Indeed there is very little hunting for any type of merganser. I've had friends try and eat Hooded Mergansers and they tell me that they are quite horrid, no matter how you prepare them. So despite being legal to hunt during the regular duck seasons, no one really hunts them and there is very little hunting pressure for any other merganser either.
Winter is the best time to see Hooded Mergansers in the DC area. Many overwinter with us, staying this far North as long as there is open water. They form small flocks of about 6-12 birds before pairing up by the end of winter. Drakes (males) do not attain their black and white "Hairy Heads" until the second year and do so only from Fall through the breeding season. First year birds look like females, with a disheveled-looking crest, except for having dark bills and yellow eyes. Adult breeding displays are neat to watch, with males showing off their crests, flipping their heads back as they try and convince hens (females), which are often in short supply, to pair up with them.

For a short video of them displaying, please check out this short YouTube video from the Capital Naturalist Channel:

Once they pair up, hens look for cavities to nest in (drakes take no part in rearing young as in most waterfowl), mostly North of our region, but a few hang around and attempt to nest. For quite a while, Hooded Merganser numbers had been low due to loss of habitat, particularly large enough trees with cavities for the hens to use. Some resort to nesting on top of stumps and as far away as half a mile from water. Shortage of suitable sites also results in their dumping their eggs into the nests of not only other Hoodies, but Wood Ducks and occasionally other waterfowl. Since they often are out competed by Wood Ducks for the same accommodations, it was a while before their numbers rebounded.


However, their numbers now appear secure. They likely benefited from nesting boxes put out for Wood Ducks and other conservation efforts. They also occasionally will share nesting cavities with Wood Ducks, laying their eggs among the Woodies' eggs and sometimes even taking turns brooding them.


Typically in late March and April, hens lay 6-18 white, very round eggs, not preparing the nesting cavity with much more than the wood chips they find inside and some pulled feathers. After approximately 34 days of incubation, the precocial young are born. The next day, they jump from the tree cavity to the waiting hen below, much like Wood Ducks do and regardless of height. For more on Wood Ducks, their first jumps, and nest boxes, please refer to the Capital Naturalist Blog on Wood Ducks:

Hoodies can swim and dive right away after parachuting from their nest. This is helpful since so many predators are willing to eat them. The females lead the young around until they fledge about 70 days later. She will sometimes conduct a "broken wing act" to lure any potential predators away while the young dive and hide. This consists of her pretending that she is hurt and splashing around just ahead of the danger until she has led it away, before she miraculously recovers.
These handsome ducks are very good at taking flight off the water, not needing the long pattering along the surface that many other divers need. They seem very agile whether over, on or under water. Here's a look at a few on an Alexandria lake:

Every year I look forward to going to my favorite sites to watch them court one another, flipping their "hairy heads" back and chasing one another. They are not only among the prettiest of ducks, but also among the more interesting in the way they behave. 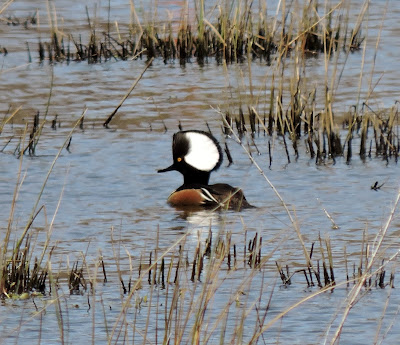 Posted by Capital Naturalist at 11:25 PM