Everything is diminutive when it comes to Green-winged Teal (Anas crecca). They are the smallest dabbling ducks in the Americas. Dabblers, or puddle ducks, are the typical ducks who tip their bottoms up to reach food below the water's surface and who can take off directly up into the air. Contrast that with diving ducks who dive under to get their food (which includes more animal matter than dabblers usually do) and who need to run along the water surface to take off. Green-wings average about 14" and weigh less than a pound.


Now all teal duck species are all small to begin with. In fact, "teal" comes from a medieval English word "tele" which actually means "small." But Green-winged Teal are the smallest of the batch. Indeed, hunters sometimes refer to them as a "Pound of Butter" as they weigh about a pound.


Green-winged Teal are very handsome birds though. The drakes (males) are considered by some to be close rivals to Wood Ducks in their beauty. In good light, the colors really come out, including their rusty heads and mask they have around their eyes. One of the best identification features though is the white bar that comes up along where their shoulder and wing would be. This also helps to distinguish them from the Eurasian Teal that is an occasionally vagrant or accidental from overseas, getting blown over and which lacks the white bar. The green speculum or patch on their wing though that give them their names is often difficult to see and does not make a reliable field mark.
Green-winged Teal diets are 90% vegetable matter. This consists especially of small seeds such as those of smartweeds, sedges, and rushes. They will also eat corn and grains among other things however. Though they are dabblers, they also are the ducks most likely to feed on mud flats.


These small ducks breed well up North, in the boreal, tundra and prairie pothole regions. They migrate South early though and can stick around with us for a good part of the winter if it stays warm and the water remains unfrozen. Most however concentrate their numbers in Louisiana and Texas. Some even make it all the way down to Colombia.
When nesting, Green-winged Teal have fairly large egg clutches, averaging 7-15 olive eggs at a time. They can nest quite a distance from water at times, up to a mile on occasion. Their eggs hatch quickly in under 3 weeks. They are also the fastest growers of our ducks, reaching maturity in less than 40 days and are ready to breed in one year.
These means that they can be found in large numbers, forming huge flocks at times (outside the breeding season) of over a hundred birds at a time. The US Fish and Wildlife Service estimated their population at 3.4 million in 2009. Greenwing flocks are very compact and fly very quickly. They often circle and false-land repeatedly, reminiscent of a flock of pigeons, if you've ever seen them over cut corn fields. They twist and turn in amazing coordination, not bumping into one another despite their tightly packed ranks. When they finally do decide to land, they all seem to want to do it at the same time it seems.
I once observed a large flock of 50 or more Green-winged teal that circled the blind I was occupying on an extremely cold winter day just as the sun came out. After repeated circling, they all tried to land on what they thought was open shallow water right in front of me. Instead it was frozen solid. It was amusing to watch the little ducks slip, skid, slide, tumble and crash on top of the ice all at once. They quickly recovered though and flew up into the air in unison, no worse for wear.
These little ducks may be small, but what they lack in size they make up for in character and appearance. It's always a joy to see them on the marsh. Here are a couple of videos from the Capital Naturalist YouTube Channel that shows them feeding (including dabbling) and among some larger cousins:
https://www.youtube.com/watch?v=TY3mL-rQs6g 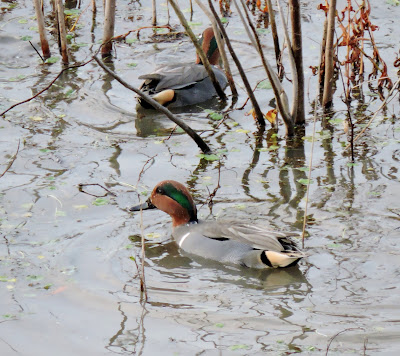 Posted by Capital Naturalist at 11:13 PM