The Gadwall (Anas strepera) is an often overlooked duck. The drakes (males) have an understated elegance about them. Not gaudy like some other drakes, they still have some fine features, especially when seen close up. From a distance though, they appear like a grey duck with a black butt. This gives them their other common name of "Gray Ducks." Though never abundant, they are very widespread, living in Europe and Asia as well as most of North America.
The males not only have a black butt, but a black beak as well. In profile they have a very angular head, giving them one of their other common names: Square-heads, though this is mostly a name given them by hunters, along with just calling them "Gaddies." No one is sure of the origin of the name Gadwall, but some think it's from the Anglo-Saxon "gad" meaning "point" maybe having to do with the fine "teeth" they have along their bills.


Many identification books tell you to look for the white "speculum" or white feather patch near the end of their wings, but frankly, that's not always easy to see, except maybe in flight where it's conspicuous. Better to look for that overall grey duck with the black butt to ID a male Gaddy. The female is easily confused with other hens when the white speculum isn't visible however.
These birds are usually in pairs or very small flocks, often mixed with other "puddle" or "dabbling" ducks such as Mallards and Pintails. They also like to stick to open, shallow and fresh water. Typical of the puddle ducks, they usually feed on or near the surface, tipping up to reach food below when necessary. Unlike many other "dabblers " though, they can also dive to reach food beyond their reach. They are also known for stealing food from coots or diving ducks when they surface. Gadwalls prefer to eat seeds and other vegetation. Plants makes up 98% of their diet. Like other puddle ducks, they can take off straight into the air without needing to run along the surface like diving ducks need to do.


As widespread as these ducks are, they actually were not common in the East. Before the 1950's it was considered rare to see one. But in the 1920's, hunters from Long Island introduced them from the West and their numbers have been steadily increasing since then. Now it is not surprising to see them, though again, they're never common.
Gaddies prefer to nest on islands when they can. They hide their ground nests in long grass, laying 7-13 white eggs in them. They are late nesters, arriving late onto their breeding grounds, which are mostly North of here and concentrated in the Northern prairie states as well. They have a short incubation period for a duck, with the eggs hatching in under 4 weeks. The precocial young can fly less than 2 months later. Gadwalls are prone to nest parasitism. Not only will they lay their eggs in each others nests, but Scaup ducks often lay their eggs in Gaddy nests too.
These are quiet ducks for the most part, not standing out in a crowd and liking to fly at night. But I enjoy spotting them, perhaps because they are not that common and are not show-offs. 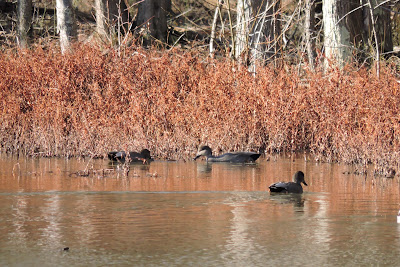 Posted by Capital Naturalist at 7:13 PM